The last week in June proved to be a busy one for all of the staff here at the hospital.  Yet again we admitted three turtles within a period of 24 hours.  First to arrive was a 25 lb. juvenile green named, Stacy.  The last two weeks of June, Florida Fish and Wildlife biologists were conducting their annual Florida Bay population assessment research.  For every sea turtle the biologists spotted, the turtle was captured, measurements and weights were taken, along with any other health assessments.  Stacy was captured during this research project and was found to have huge fibropapilloma tumors growing all around her head and body, the biggest one on her right cheek.  She received her name after the renowned biologist who found her, University of Florida and NOAA Sea Turtle Scientist, Dr. Brian Stacy. 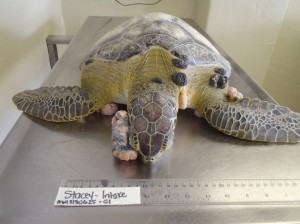 About four days later, Stacy was stable enough to have an endoscope performed on her to determine whether there were any internal tumors growing.  Thankfully, our staff discovered no internal tumors and we also verified that Stacy was in fact a girl.  Stacy is currently eating off and on on her own but is very active.

The following day, the stranding phone rang twice.  The first one was regarding the 70 lb. loggerhead, Captain Hook (story below), and the other from biologists at Mote Marine Laboratory off of Summerland Key who had caught a juvenile green sea turtle in their gill net.  This 7 lb. turtle was also found to be covered in tumors.  With these turtles that develop this fibropapilloma virus, it is crucial for them to get immediate help due to those tumors being connected directly to the turtle’s blood supply.  Without any intermediate action, the turtle can become very weak and anemic because these tumors are essentially slowly sucking the life out of them.

The turtle later named Jack, is currently making a smooth recovery in one of our rehab tanks.  He is currently eating on his own and has become very active.  It will be a matter of time before both him and Stacey undergo surgery to have those large tumors removed.  Once those tumors are removed, they will each begin that yearlong waiting period of hopefully going tumor free.  Thank you to all the wonderful people involved in all of these rescues!  Its nice to know there are passionate, caring people out there ready to intervene and take action in order to preserve the sea turtle species so thank you again!