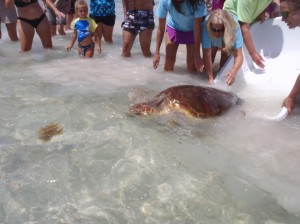 Weighing 176-lb at the time of his release, loggerhead Rocky D rounded out the last of 4 loggerheads to be released in the month of March.  The turtle bee-lined it toward the open ocean on March 31st, the day of his release.  Rocky D arrived at The Turtle Hospital with an impaction of small shells, an alternate food source he feasted on due to overfishing of the typical lobster/crab meal.  In two-and-a-half months, the impaction and subsequent gas were gone, and Rocky D was released at Anne’s Beach in Islamorada among a crowd of well-wishers.