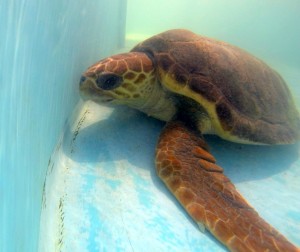 Patti waiting to get released

The Turtle Hospital has a BIG weekend coming up and you are invited to join in the celebration as two loggerhead sea turtles are released back to the wild!  Saturday, May 30th, Patti, a sub-adult sea turtle will be released off of Sombrero Beach in Marathon at 10:30 a.m.  Patti arrived at the Turtle Hospital in August 2014 in critical condition.  Patti was emaciated, suffering from pneumonia and lock jaw with ulcers on both eyes.  Patti’s prognosis was grim.  The dedicated team at the Turtle Hospital spent countless hours that turned into months providing Patti with the very best care.  Patti was dry docked out of water and received IV nutrition for over 2 months.  Rehab staff worked on Patti’s lockjaw with laser treatments and physical therapy in the form of jaw stretches.  Patti’s treatment included broad spectrum antibiotics, vitamins, iron, and a healthy diet of squid and fish.  Patti is healthy and now able to open her jaw wide to catch live food.  Please join us on Sombrero Beach in Marathon this Saturday to help cheer on Patti’s miraculous recovery! 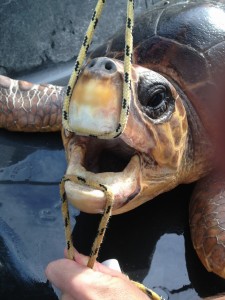 Tiny getting ready to be released

Sunday, May 31st, Tiny, a 300 pound adult loggerhead sea turtle will be released off of Higg’s Beach (behind Salute’ Restaurant) in Key West at 12:30 p.m.  Tiny has the largest head of any sea turtle that has checked into the Turtle Hospital in 29 years!  Tiny suffered from a boat strike and is now fully recovered and ready to return to his ocean home just in time for mating season.  Tiny was a picky eater in his time at the Turtle Hospital and in the beginning would only eat fresh lobster. Tiny received intense wound care and was treated at the Turtle Hospital with broad spectrum antibiotics, vitamins, iron, and a healthy diet of lobster, squid, and fish.  Please join us this Sunday for a BIG send off as this 50 year old plus male loggerhead returns to the wild! 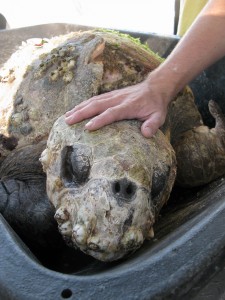 Tiny when he first arrived