Shortly after the release of Snoop, an adult Kemp’s Ridley, The Turtle Hospital received a frantic call from fishermen off of Key West. Several miles offshore in the Sargassum Weedline, fishermen searching for Dolphin (the fish known as Mahi-Mahi) noticed a juvenile sea turtle struggling in the midst of a fish feeding frenzy! These large fish hunt under the Sargassum and feed on small fish and invertebrates which use the floating seaweed for shelter in the deep sea. Hatchling sea turtles spend the first 3-5 years of their life drifting under the Sargassum using it for shelter from the many predators they face. In the excitement, the juvenile sea turtle was struggling to stay out of danger. Franklin and Crystal Thankfully, the fishermen noticed the scared sea turtle and were able to bring him on board their boat and back to shore. Turtle Hospital staff responded and brought the small turtle back to the hospital for evaluation. 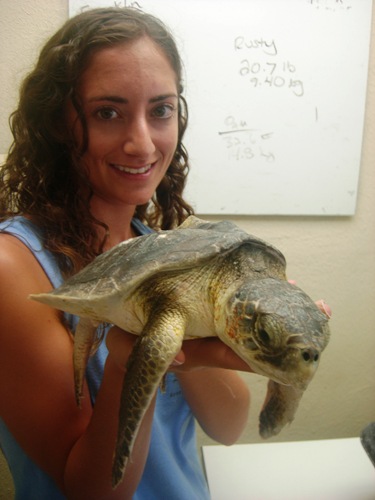 To everyones suprise this was a very special sea turtle, a beautiful and critically endangered juvenile Kemp’s Ridley, affectionately named Franklin! Franklin was lethargic after his brush with death but otherwise seemingly healthy. Slightly underweight, staff has increased the amount of squid and shrimp in his diet and given him a place to rest and regain his strength. Staff is certain his stay at The Turtle Hospital will be short and are looking forward to releasing him soon. In the meantime, guests that visit The Turtle Hospital have the unique opportunity to meet a Kemp’s Ridley, the rarest sea turtle in the world.

Sadly little Franklin suddenly passed away. A majority of juvenile and post hatchling sea turtles suffer from trash ingestion. As plastics and trash photodegenerate the smaller particles which float often lodge in the tangled Sargassum. These small colorful bits of plastic resemble possible food for small sea turtles who mistakenly eat the trash. If it does not pass the result is often fatal. A necropsy will be performed to confirm this suspected cause of death.