A Visit to the Eye Doctor

Turtle Hospital staff began early yesterday morning, pulling turtles from their tanks while still dark for a road trip north. The ambulance was packed with six juvenile Green turtles headed for Dr. Karpinski’s office in Pinecrest, just outside of Miami. These 6 Greens are all afflicted with Fibropapilloma, a disease resulting in cauliflower like tumors that grow from the hard and soft tissues. One of the first places the tumors begin to grow is around the eye. If the tumor compromises the cornea, their is no way to salvage vision and the turtle is euthanized due to poor chances of survival in the wild. Therefore, it is a race against the clock for many of these turtles to have surgery before the tumors blind the turtle. 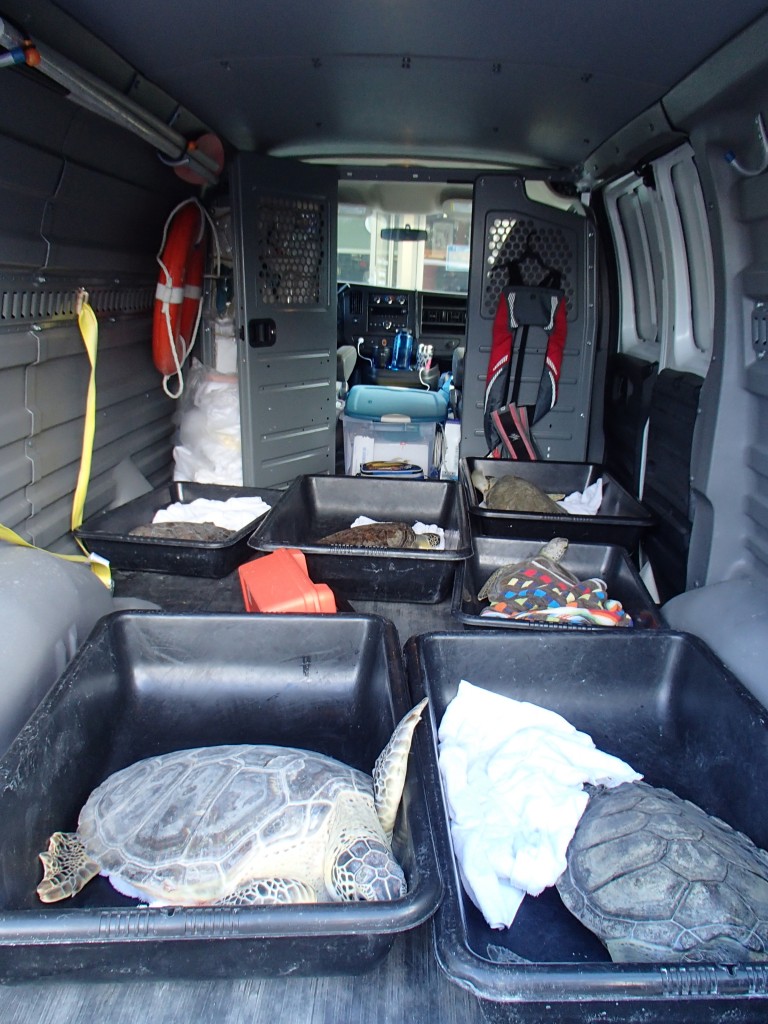 After 2.5 hours, the turtles arrive at Pinecrest Veterinary Hospital

Jack and Hook had visited Dr. Karpinski in early December where it was decided to try a different medication. This anti-cancer medication was compounded into eye drops that the turtles could receive twice a day when out of water for 15 minutes. After a month and a half, it was evident that Hook was making progress as the small bump that had continued to regrow after surgery, was now beginning to shrink in size. These promising results led to January 16th, 2014 when Jack, Hook, and an additional 4 Greens were brought to Dr. Karpinski for eye treatment. 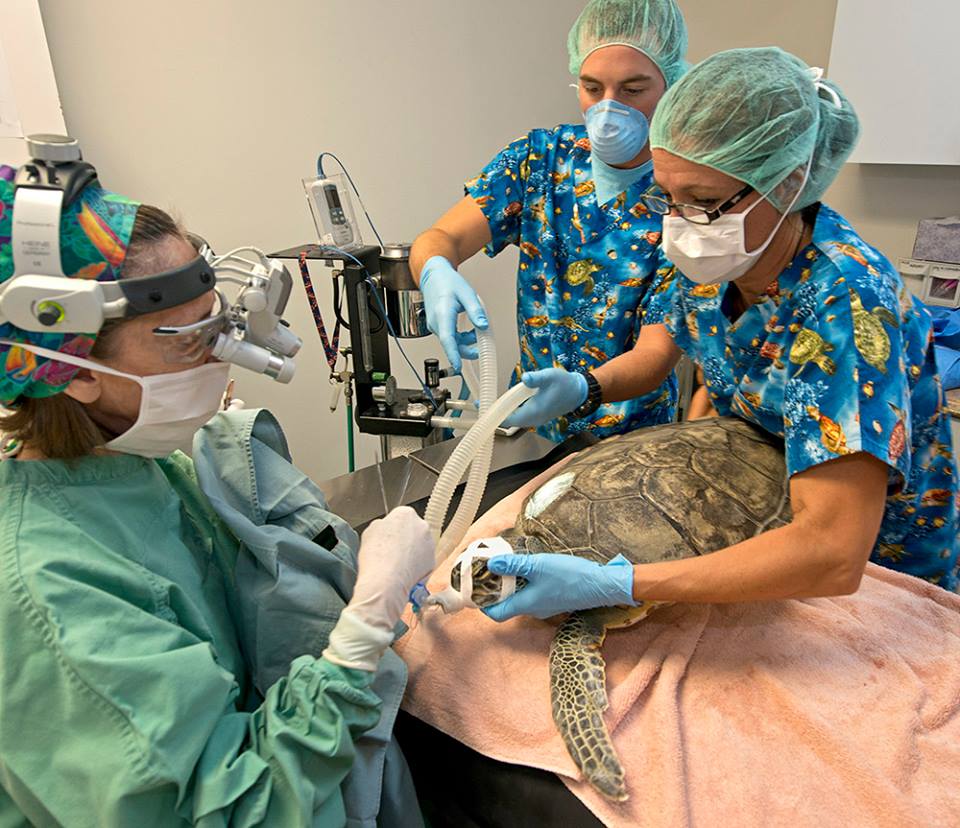 Dr. Karpinski gets ready to perform surgery on Amethyst, assisted by rehabber, Matt and Manager, Bette

Amethyst, Emerald, Chris, and Augustus were put under general anesthesia for a procedure to remove large masses of tumors from their eyes with a scalpel. What was left after surgery is mostly microscopic cells and parts of the tumors unable to be seen with the naked eye. Now, all four turtles will also receive eye drops twice a day in order to extinguish the tumor cells completely from the eyes. As long as the turtles have one fully functional eye and can be clear of Fibropapilloma tumors for 1 year, they are able to be released. 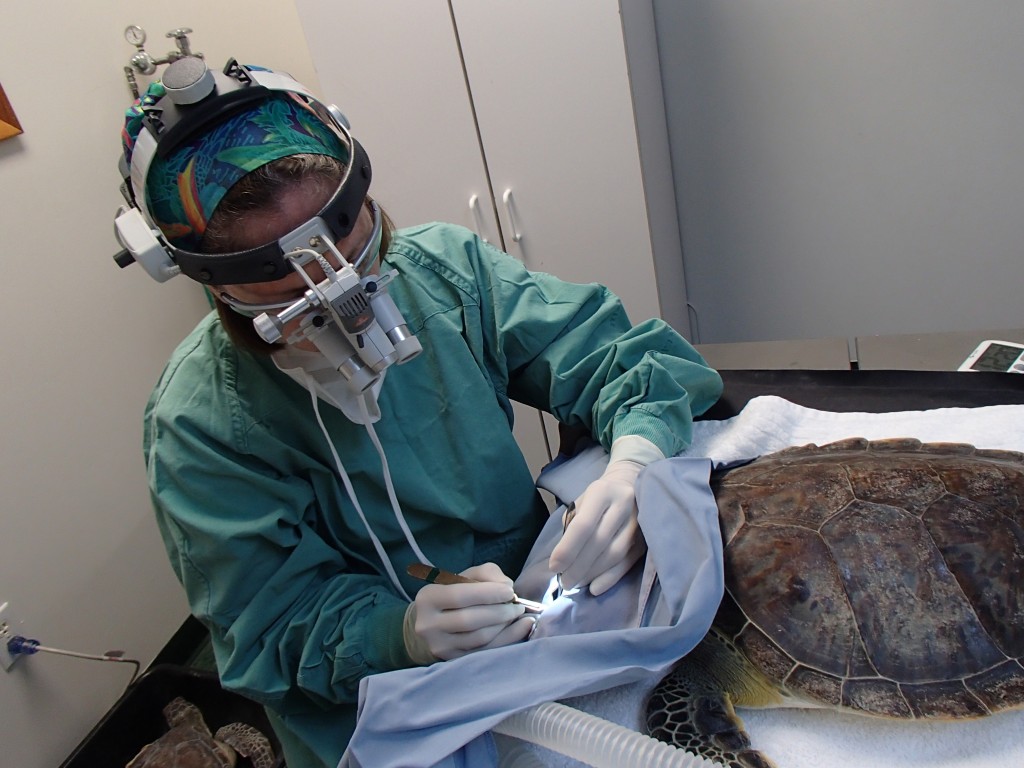 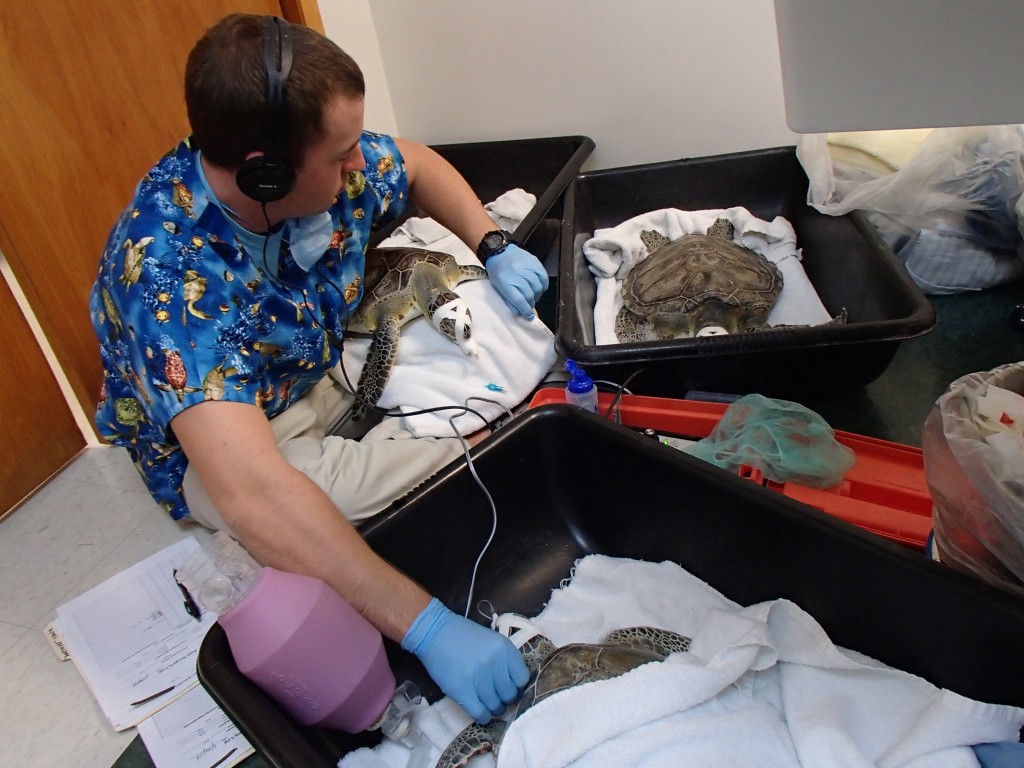 Post-op care includes monitoring vitals and breathing room air for the turtles to regain consciousness after anesthesia. All turtles took an hour or less to begin breathing on their own.

After a long day, including post-operative care in the rear of the ambulance on the drive home, all turtles have successfully recovered and are heading back into their hospital tanks this morning. We have lots and lots of hope that these turtles will all be able to be released one day! 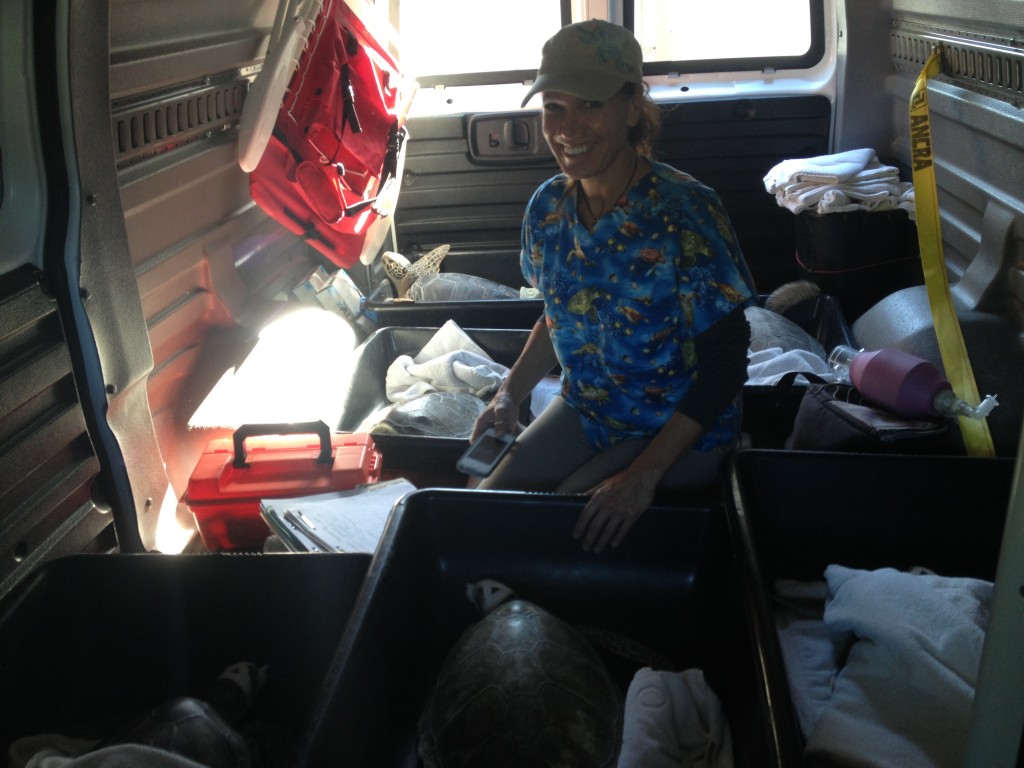 Bette continues to breathe and help the turtles wake up on the trip back to Marathon.

In February we have scheduled releases for two juvenile Greens that were rid of their FP tumors in early 2013, and it’s these turtles that inspire us to fight for the next batch affected by this terrible disease. The Turtle Hospital has partnered with University of Georgia to help understand FP and to develop a cure in the future.