On Wednesday, rehab specialist, Devin, responded to a call about a FP green sea turtle seen floating behind a residence in Little Torch Key.  Concerned caller, Gwen, had noticed the turtle hanging around the same spot behind her house all morning and noticed he had a large FP tumor on his neck.  When Devin arrived at the scene, “Barney”, was seen floating about 20 yards offshore.  She debated on whether to launch the kayak and paddle out to retrieve the turtle in the net or just snorkel out and try to grab the turtle.  It was a nice day and Barney looked very lethargic so Devin dove in.  She hovered over Barney for a couple seconds and then dove down about 2 feet and grabbed the turtle by his front flippers and swam to the surface.  Fortunately for Devin, Barney didn’t put up much of a fight and was brought safely to shore.  Upon arrival at the Turtle Hospital, it was found that Barney had either suffered from a boat propeller strike or a large predator attack.  A large and small crack consumed the whole left side of the turtle’s carapace and a small puncture wound was also noted on the underside.  Turtle Hospital staff was hesitant that Barney would make it through the night due to his low blood levels but he pulled through.  The following morning the algae was wiped free from his shell and he was put out back in a shallow water tank.  Barney is very alert and seems to be staying strong despite his circumstances.  Please keep him in your thoughts and stay posted to our website for updates on how he is doing.  A big thank you goes out to Gwen and Barney’s rescuers for spotting him just in the knick of time! 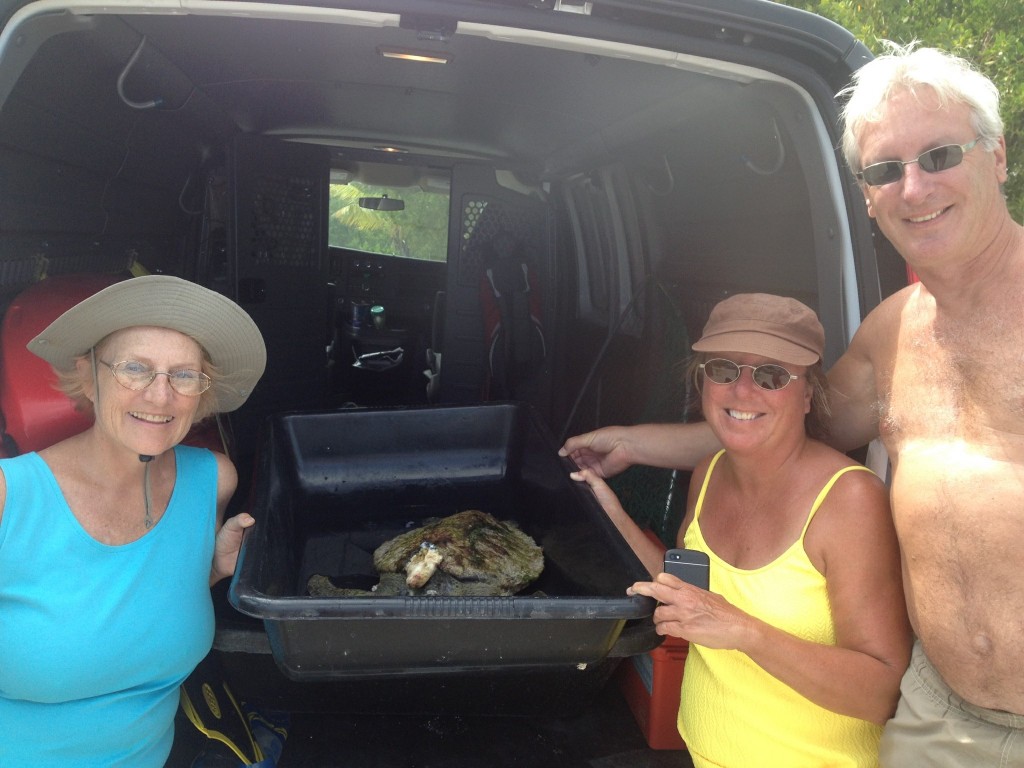 Barney and his rescuers