Eyes on the Prize

This past Tuesday, Turtle Hospital staff were very busy with seven surgeries on turtles with the fibropapilloma virus.  These turtles were mainly suffering from eye tumors and were evaluated to see if vision was still present in these affected eyes or not. 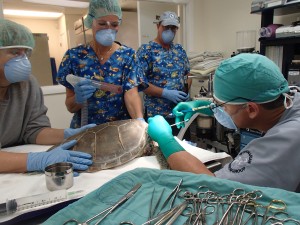 Ron, Hook, Archie, and Elena all went under anesthesia to have their eye tumors removed.  All were successful and these turtles are still deemed as being releasable after they reach their one year time period of going tumor free.  Hook and Elena are now tumor free so their year has begun but Ron and Archie still have various other tumors around their flippers that are waiting removal.  Unfortunately, poor Dennis who came in a few weeks ago had large tumors growing over his cornea thus impairing his vision and deeming him non-releasable.  Luna and Jack were also evaluated and will continue to be, based on some cloudy substances around the cornea.  Both appear to still be able to find their food in their tank though. 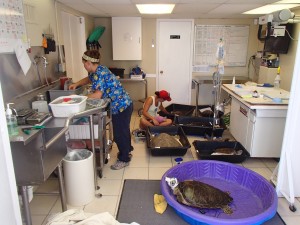 Rehabbers Marie and Devin checking heart rates, breathing for the turtles, and ensuring they wake up successfully from their anesthesia

A BIG BIG BIG THANK YOU goes out to our awesome veterinarian Dr. Doug Mader for donating about six hours of his time that day to get the majority of our turtles up to par on their tumor removals.  Also to our Turtle Hospital staff who worked almost a twelve hour day ensuring these guys were awake and functioning before we called it a night.