2013 is upon us, and with its arrival come our final counts over the past year.  Tallying up the numbers, we had a total of 56 new patients in 2012 including 8 transfers.  Considering the average annual intake is 70 sea turtles, we were pretty happy having only 56! 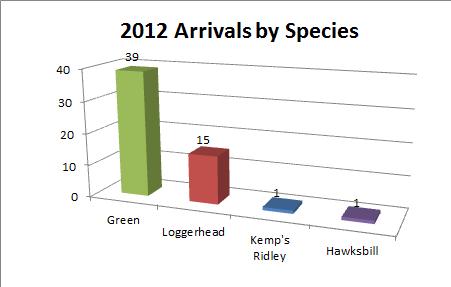 Greens dominated this year in hospital admittance. These totals are separate from hatchlings.

Our hatchling total was up to 88 this year, largely skewed by a lighting disorientation at the Truman Naval Air Station in Key West, FL, which brought us 31 Loggerhead hatchlings to rehabilitate and release.  We were surprised to admit 5 Hawksbill hatchlings, as these babies come in much less often, sometimes without any coming in at all in a nesting season.  Those 5 baby sea turtles must have come from unmarked Hawksbill nests on remote islands in the Keys, as they floated back into marinas before the one known Hawksbill nest in the Keys hatched.  All of the Green hatchlings were rescued by FWC in the islands of the Marquesas. 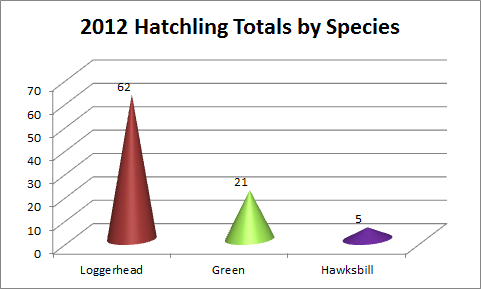 Loggerheads commonly nest in Florida and the Florida Keys, so we were not suprised that the majority of our hatchlings were of this species.

When we looked at our new arrivals by age category (excluding hatchlings), the majority of our patients were classified as juveniles.  This isn’t surprising considering we get so many green sea turtles with the FP virus, and the virus characteristically attacks juvenile Greens returning to near shore waters after their beginning, pelagic life stage at sea. 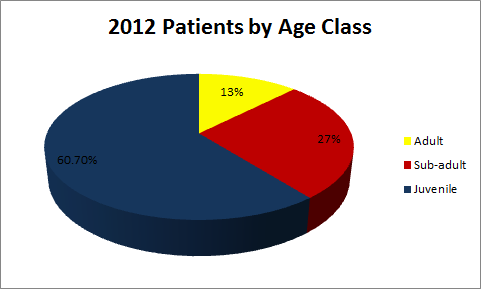 The juvenile age class took home the grand prize for most intakes in 2012.

Anthropogenic–or, human-related–causes for rehabilitation were overwhelmingly prominent.  Following with our yearly trends, FP cases topped the charts.  (Remember, the fibropapilloma virus is linked to water pollution!)  Boat hits followed with entanglements in a close third.  We are still rehabilitating an adult Loggerhead that came in with 4 fishing hooks inside of him resulting in a case of lockjaw.  Many more turtles suffered from impactions which is commonly linked to overfishing of local food sources.  And, we cannot overlook the fact that a vast number of our patients were admitted with multiple human-related ailments. 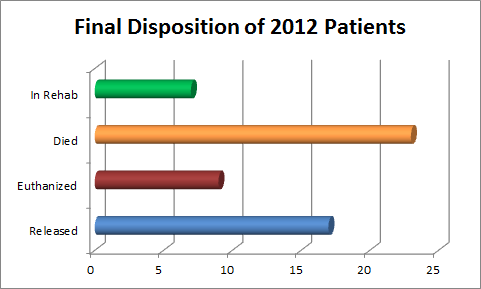 The normal rate of release in rehab facilities for other animals is only 25%. Sea turtles are beating those odds every day… and every year if they’re FP turtles!

Despite the rough shape our patients arrive in, sea turtles have an amazing ability to heal themselves.  With help from the Rehab team, those that spend more than 24 hours in our care have roughly a 70% chance at being released.  Most of the non-releasable turtles are ones that have to become permanent residents due to buoyancy issues from boat strikes, or FP turtles that sadly have to be euthanized due to internal tumors.  Keep in mind that a lot of our patients have to complete 1-year free of tumors before being eligible for release, which means they might have arrived in 2012 but won’t get released until 2013!  Subsequently, these turtles are still in rehab.  Conversely, we had 3 turtles arrive in 2011 that completed their tumor-free year and were released in 2012!  Hurray!

These numbers remind us how important rehabilitation is for the conservation of sea turtles.  One sea turtle release could spring an entire generation of sea turtles in due time.  Every individual that makes it back into the wild is helping its species survive.  And those that cannot survive at sea but have to remain in human care are also very important, acting as ambassadors for their ocean friends!