Earlier this month, the Turtle Hospital received a special little surprise; a four-month-old post-hatchling sea turtle was delivered to us by Dr. Jeanette Wyneken.  This little loggerhead emerged from her nest on August 17 on a beach in Boca Raton, Florida.  She and nine other hatchlings were taken into a lab as part of a sex ratio research study at Florida Atlantic University.  The hatchlings were kept in tanks with running seawater and fed a well-rounded diet.

Once the hatchlings reached a weight of about 120 grams they were examined laparoscopically to identify their sex.  Luckily, this procedure is minimally invasive.  The researchers were trying to determine the sex ratios of the hatchlings in the nest because the sex of a sea turtle is influenced by the surrounding environment temperature during a critical stage of development.  Cooler temperatures produce male hatchlings while warmer temperatures produce female hatchlings.  Scientists are interested in the sex ratios of nests because understanding how many males and females are being produced is important in order to conserve these amazing creatures.

Fisher is growing rapidly and we are quickly becoming attached to the little loggerhead.  She will be here at the hospital until she is large enough (45cm) to be released back out on her own.  For now, she will be an education turtle to help us demonstrate to the public why sea turtles are so fascinating.  Stayed tuned for more pictures of Fisher over the next couple of years. 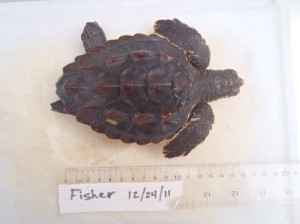 We will measure Fisher weekly to track her growth.