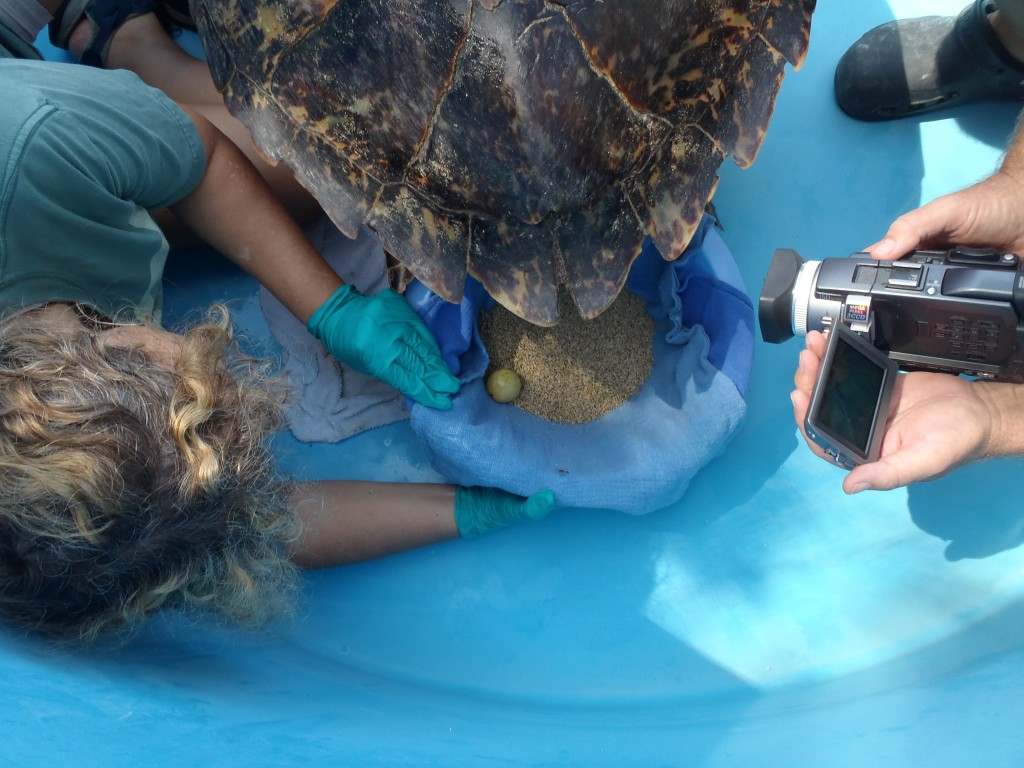 After the arrival of adult female and critically endangered Hawskbill “Good Hope” from St. Croix on the night of September 2, our turtle patient continues to get 24-hour care by The Turtle Hospital’s small but dedicated staff.  We will be keeping you up-to-date with her condition with daily recaps from here on out. 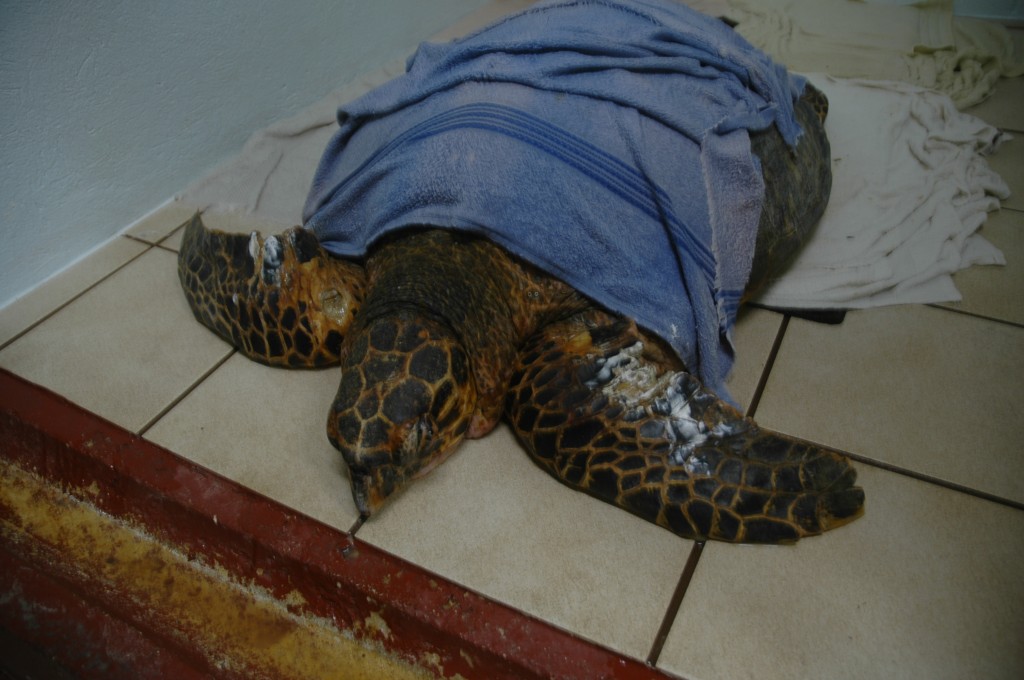 Prior to her transfer to The Turtle Hospital for rehab, Good Hope resided in a dog pen at a domestic animal clinic in St. Croix of the U.S. Virgin Islands. 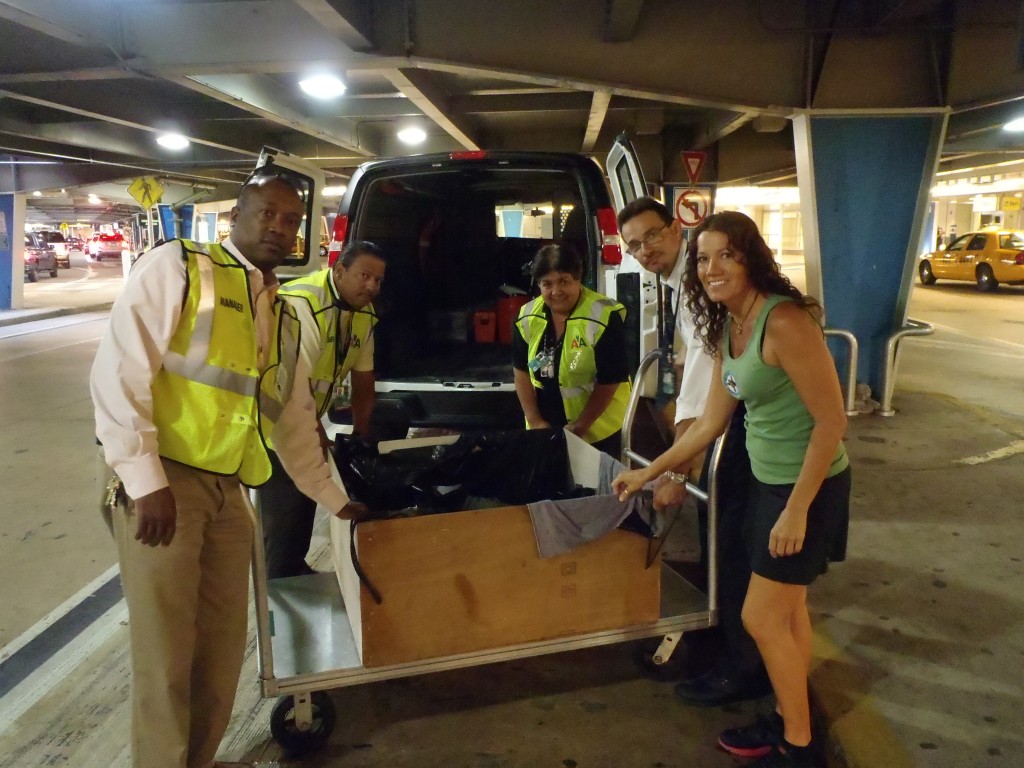 American Airlines personnel aid in the transfer of Good Hope and her crate from aboard the aircraft to the back of our ambulance. 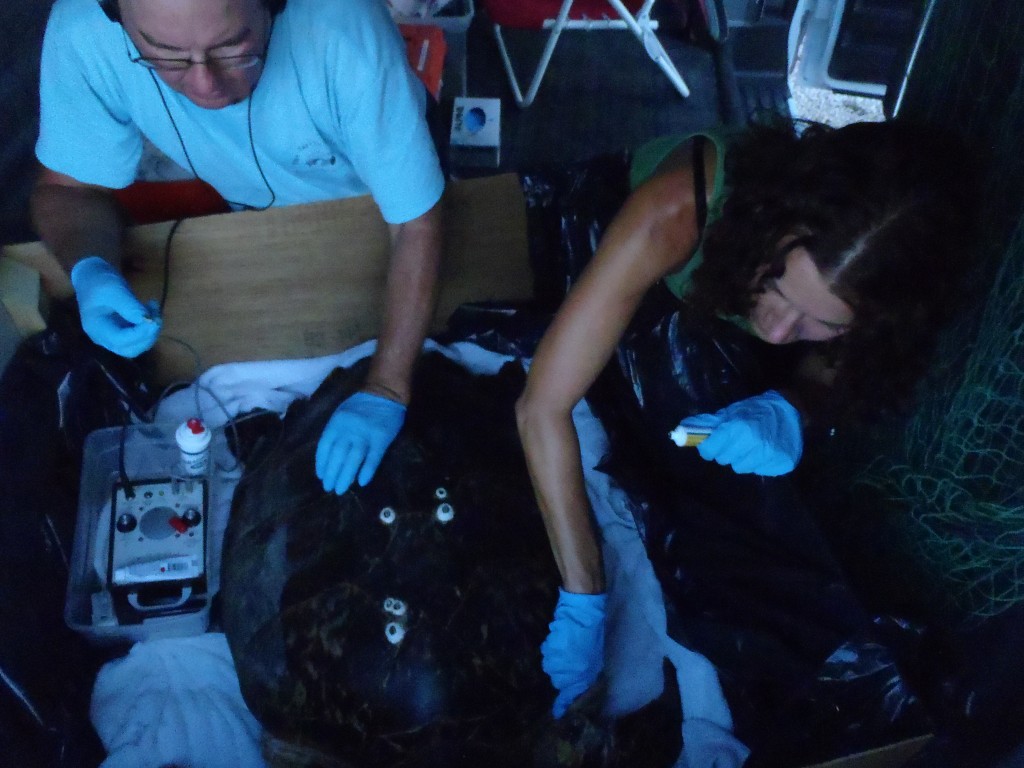 The patient’s vitals are checked in the back of the ambulance before beginning the drive back to the Keys from Miami International Airport. Pictured here, Rehabber Tom Luebke and Manager Bette Zirkelbach apply soothing ointment to the gaffed flippers and use Doppler radar to check Good Hope’s heart rate.

Without a doubt, the days and nights have been long and challenging for both our turtle patient and the Rehab team, though we continue to work hard together to ensure the best quality care possible. 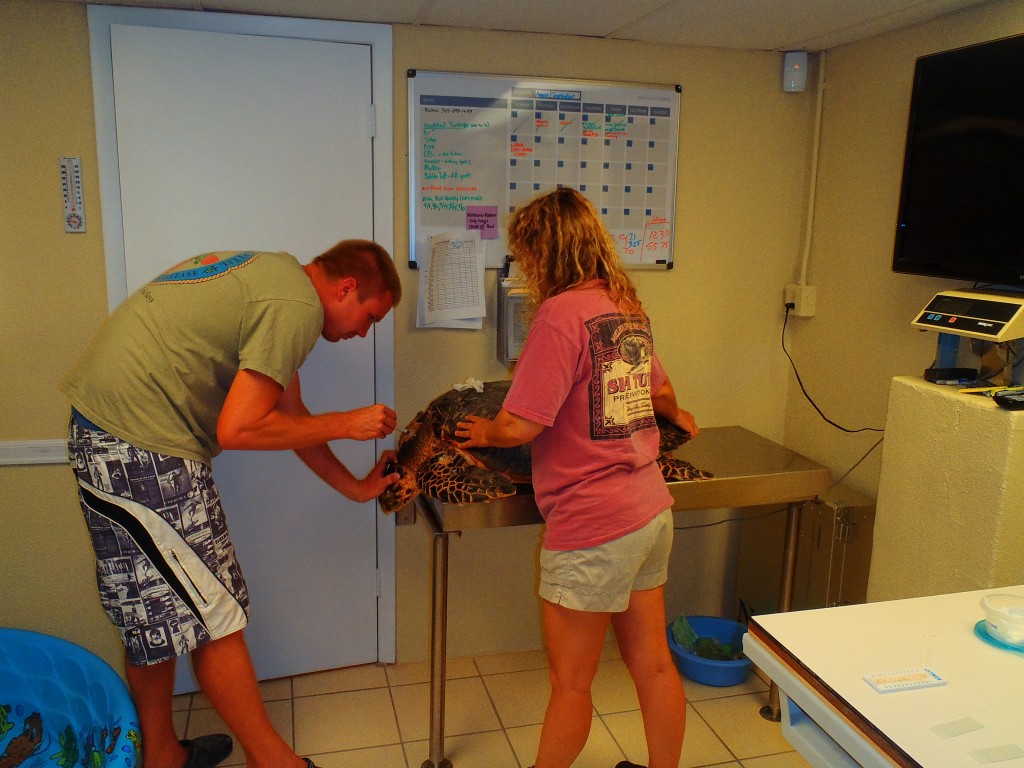 Following intake protocol, Good Hope receives an in-house blood draw led by Rehabber Gunnar Zollinger and assisted by Sue Schaf of FWC. The blood was also sent out for a secondary analysis. 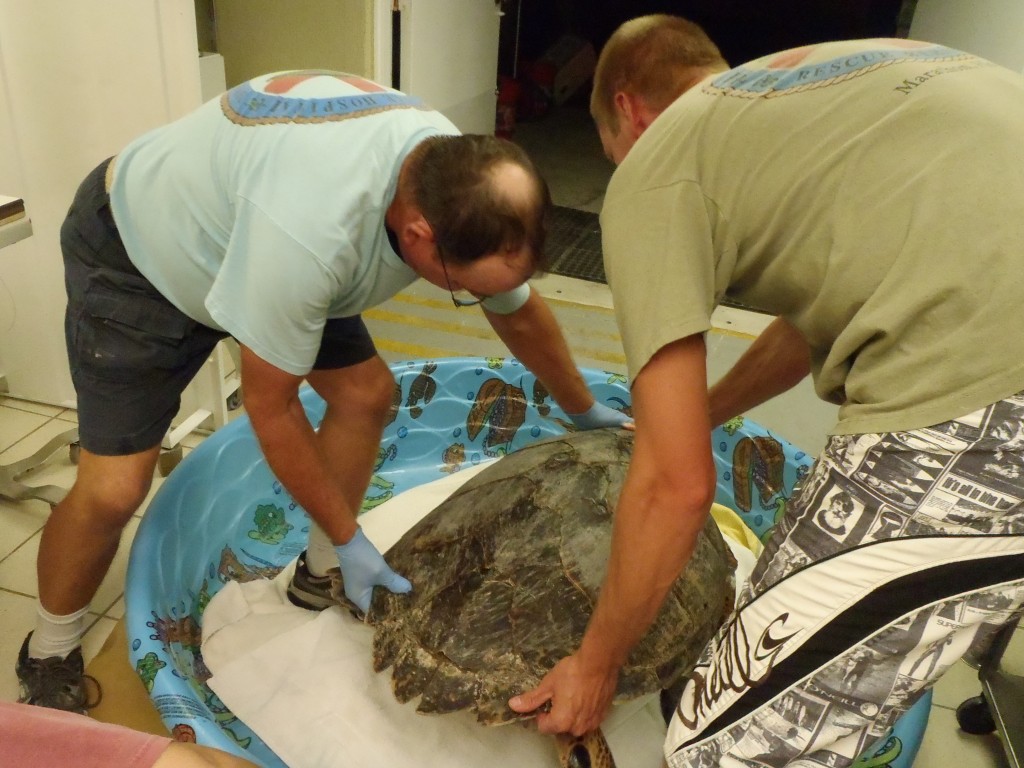 The Rehab team gently lowers Good Hope into her holding pool in the ER for overnight dry-docking so that her vitals can continue to be monitored.  Gravid with approximately 100 eggs, movement of the turtle must be done with extreme caution as these marine animals are not accustomed to the effects of gravity above water.

An initial assessment of Good Hope’s blood chemistry suggested 80% of her blood cells had become septic, meaning a bacterial infection had entered into the bloodstream.  However, 24-hours later, a secondary examination of those cells suggested the sepsis is only between 20-40%.  Still in critical condition and a highly weakened state, her prognosis has thus improved greatly.  The gaff wounds around the front flippers as well as her swollen eyes continue to be cleaned while we also focus our efforts on inducing labor. 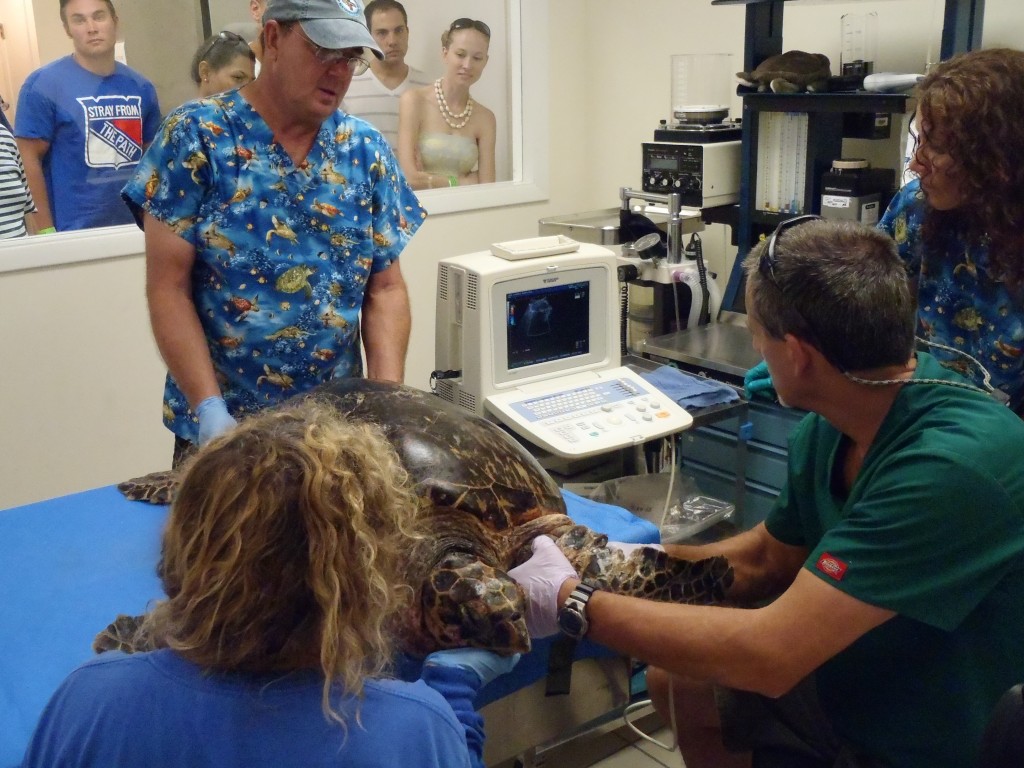 Visitors to The Turtle Hospital look on as our veterinarian, Dr. Doug Mader, performs an ultrasound to better view the eggs.

Due to Good Hope’s guarded state, it is imperative that she expel the approximated 100 eggs inside of her so that her body can strengthen.  Luckily, she was already near labor upon intake in our ER on Saturday, dropping 5 eggs overnight on Sunday after her ultrasound.  Unfortunately, these first eggs were not viable as they had been laid in salt water. 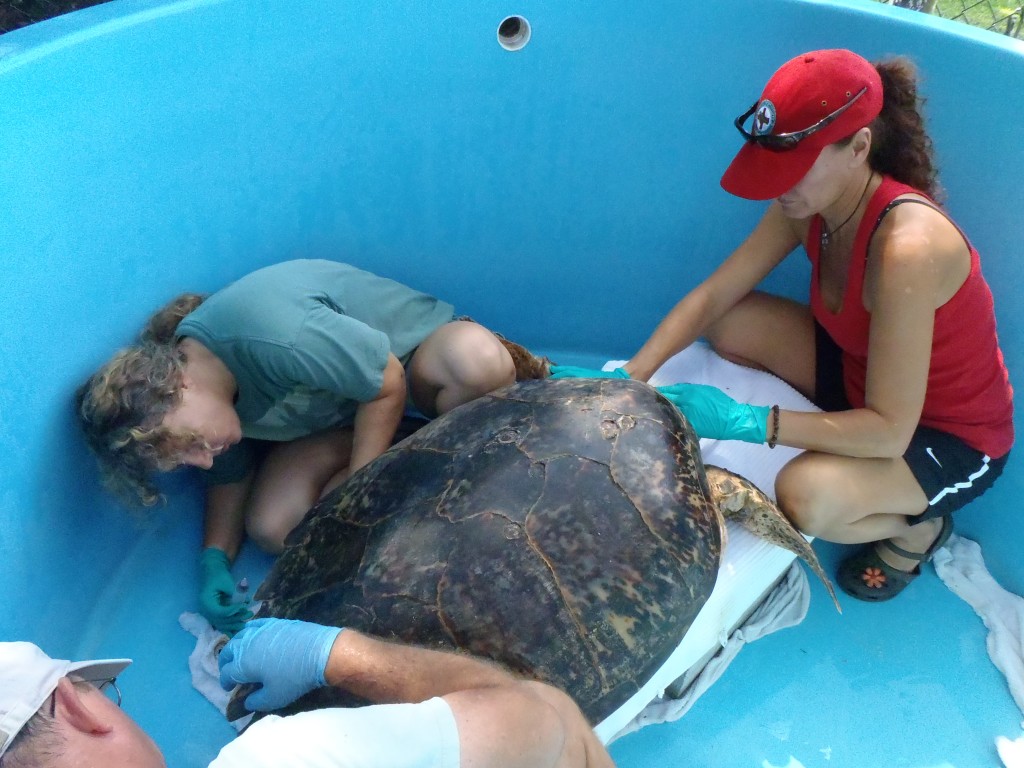 Good Hope receives her first injection of oxytocin, a labor-inducing drug specific for mammals. We are awaiting a shipment of Vasotocin, the reptilian form of the drug, which we hope will better speed along the egg-laying process.

However, after we knew she was able to pass eggs through the egg canal, we were able to press on with our goal of clearing Good Hope’s reproductive tract.  An injection of the drug “oxytocin” was administered on Monday morning after the initial eggs dropped.  Because oxytocin is used to induce contractions in mammals, we were not sure if it would be effective on a reptile.  Nevertheless, it was our best bet until we can obtain the reptilian form of the drug, called “vasotocin.”  The injection was given at 11:o8 AM on Monday and 1 egg was laid 28 mintues later. 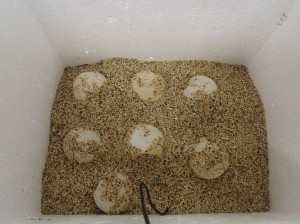 Good Hope laid 7 eggs on the afternoon of September 4. Here they are prior to full sand coverage inside a temperature-monitored incubator.

Throughout the afternoon, she laid 4 eggs around 12:28 PM and another egg at 2:28 PM.  We continued with hourly check-ups throughout the night, but the next set of eggs was not laid until 7:55 AM the next morning on Tuesday, September 4.  An additional 7 eggs emerged around 4:00 PM, and 3 more eggs had been expelled by 5:30 PM.  Only 1 egg was laid the next day on Wednesday, September 5 around 5:45 PM, bringing our total of potentially viable eggs to 25.  All of the eggs have been placed in Styrofoam coolers packed in sand from St. Croix.  The temperature is being monitored as the sex of developing eggs is environmentally-dependent, based on the ambient temperature in their location of the nest. 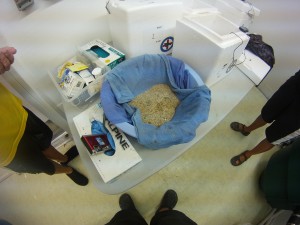 We are attempting to capture any laid eggs in a bucket of sand before transferring them into our research room for incubation in Styrofoam containers filled with native St. Croix sand.

We cannot predict which eggs if any will hatch as the severity of Good Hope’s medical state could have altered their developmental progress internally, but, as her name might imply, we always like to remain hopeful here at The Turtle Hospital.

Continue to check back on our website for updates on Good Hope’s condition as well as news on the influx of patients and hatchlings we have been receiving of late.  Be sure to stay tuned to local and national news as Good Hope has already been covered by NBC news, CBS4 and The Miami Herald.  The Weather Channel even ran two segments highlighting how wildlife was affected by Tropical Storm/Hurricane Isaac.  Good Hope was in the spotlight alongside the 22 pilot whales that stranded along Florida’s coastline. 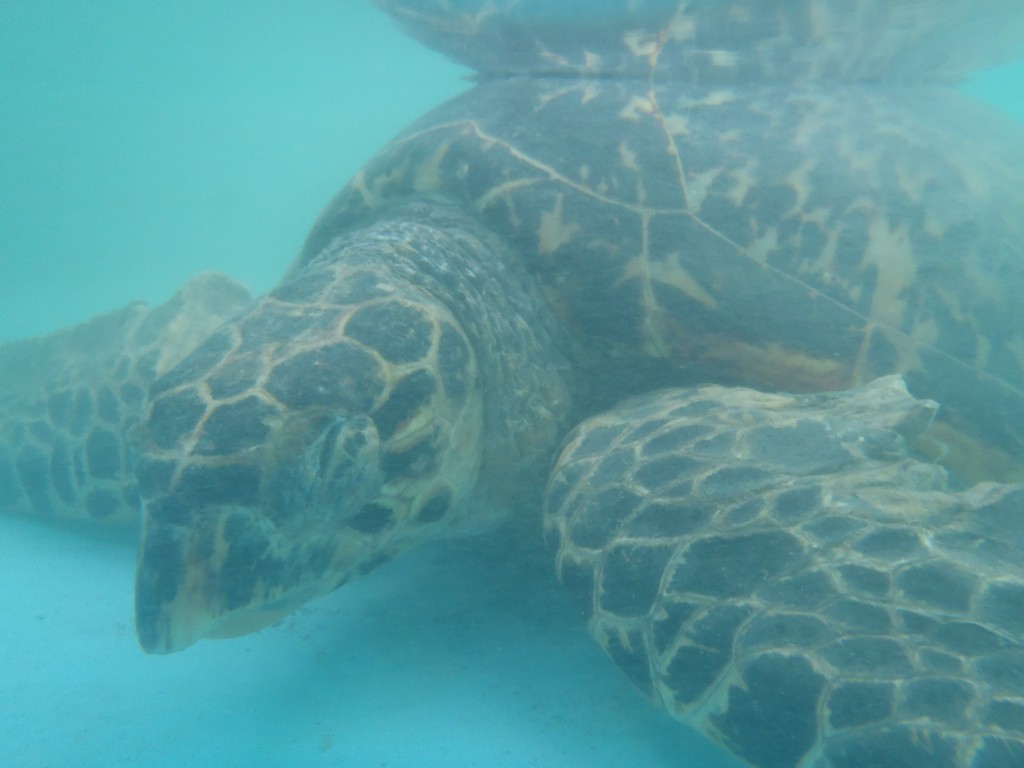 Currently resting in shallow water out back at our Rehab enclosure, Good Hope recovers in a designated “quiet zone” with continued care around the clock.