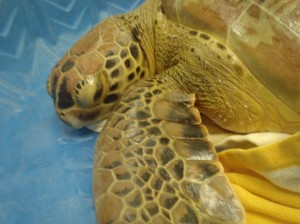 On Sunday, June 17, the Turtle Hospital received a report about a sea turtle swimming in circles and floundering near a sand bar at Boca Chica Pass. There were quite a few boats at the sandbar that day, but one boat in particular initiated Jill’s rescue.  Jill, the turtle, was named after the nice lady who put forth the effort to make sure the turtle was rescued. Jill, the rescuer, was out boating with her boyfriend and another friend named Justin. Upon seeing the turtle in need Jill contacted Florida Wildlife Commission. After receiving instruction from an FWC officer, the rescue was initiated. Justin Bodine dove into the water for the rescue of the 70 lb green turtle, and pulled her up on to the boat. They transported the turtle back to the Key West Yacht Club to wait at the docks until a rehabilitation specialist from the Turtle Hospital arrived in the ambulance.  Jill is now safe and sound in her hospital tank; However, it is suspected that the reason for her swimming in circles may be due to a blunt force trauma boat hit to the head. We are hoping that with time the damage may correct itself through healing. We can not be sure of the extent of her head trauma until she undergoes an MRI. This would allow us to see more than the findings from her in house x-ray. Stay posted to hear more about Jill’s recovery here at the hospital!