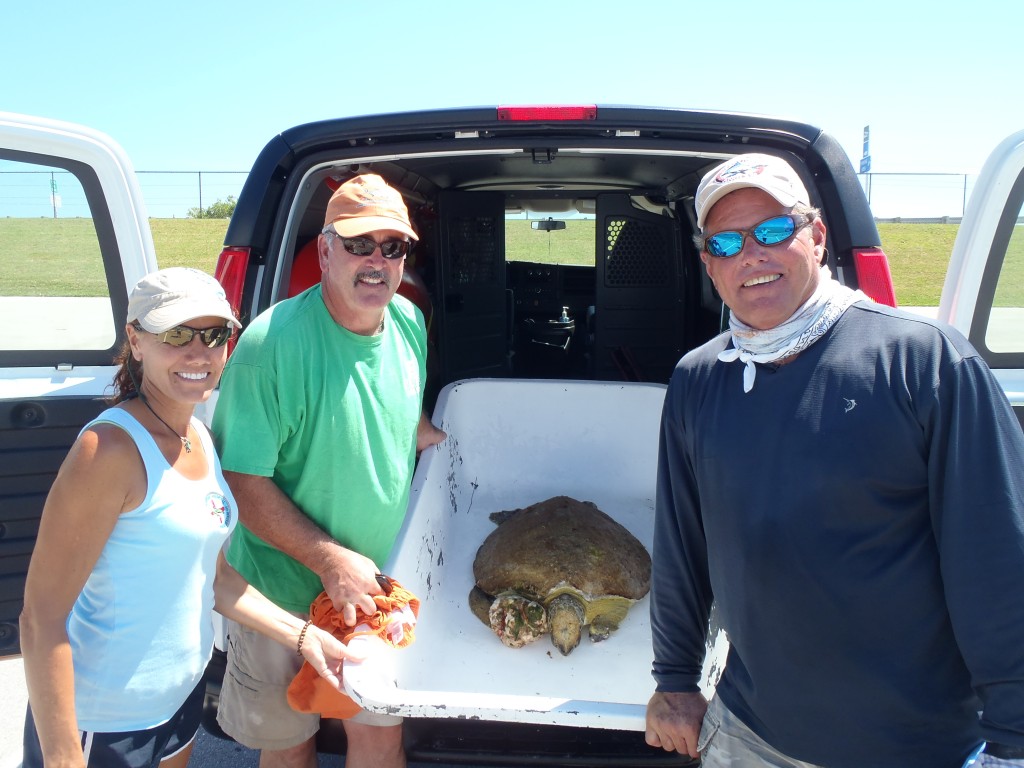 “Jimbo” was the second turtle to have been brought to our hospital by Ricou Deshaw, pictured here with fellow rescuer Charlie ward and our manager, Bette.

When the Rehab team assessed “Jimbo” upon intake, it was apparent that this 65-lb juvenile green had fallen victim to the fibropapilloma virus.  A very large tumor protrudes from the topside of Jimbo’s right front flipper–so large a tumor that one could easily overlook the fact that the turtle is missing the other flipper!  A left front “nub” has old wounds suggestive of a past entanglement.  Luckily, FP seems to be the only ailment requiring treatment.  With plans to scope the turtle for signs of internal tumors, we’re crossing our fingers that Jimbo’s insides are pap-free!  If so, we will move ahead with the laser surgery to remove any external tumors.  It will be interesting to get a new weight on the turtle once this mammoth of a tumor has been removed!

Jimbo was not the first turtle to be rescued by Ricou Deshaw.  Found in shallow water near the south end of the 7-mile Bridge, Mr. Deshaw’s most recent rescue was a loggerhead named “Elliot” from waters surrounding Tavernier.  Deshaw had been at-sea filming a “flats fishing show” with Charlie Ward.  We are extremely grateful to these islanders for remaining ever-vigilant on the water, and taking time out of their day of fishing (and filming!) to save a sea turtle.  Our work would be non-existent without Good Samaritans like them!  Hopefully, humans can also do their part to be wary of chemical waste put into the oceans as the FP virus has been linked to water pollution!