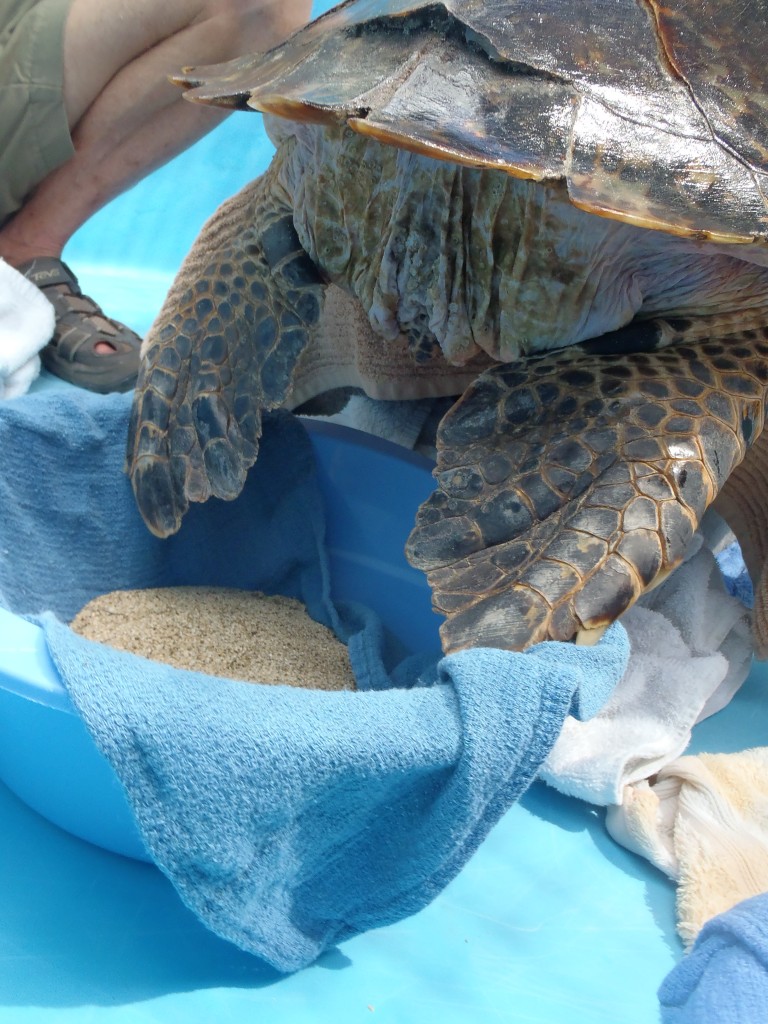 A bowl of sand from St. Croix acts as a nest to catch falling eggs. The bowl was placed beneath Good Hope as her contractions became closer together.

Yesterday, September 7, was a very long day for Good Hope and the Rehab staff. We received the highly anticipated two doses of Vasotocin, the reptilian drug for inducing labor. Good Hope’s condition continued to worsen throughout the day and night, and the Rehab staff was wary of losing her. Conferencing with numerous sea turtle experts including Dr. Jeanette Wyneken at FAU, it was decided that we should follow through with the labor induction as some of the eggs had begun to rot inside of the hawksbill. 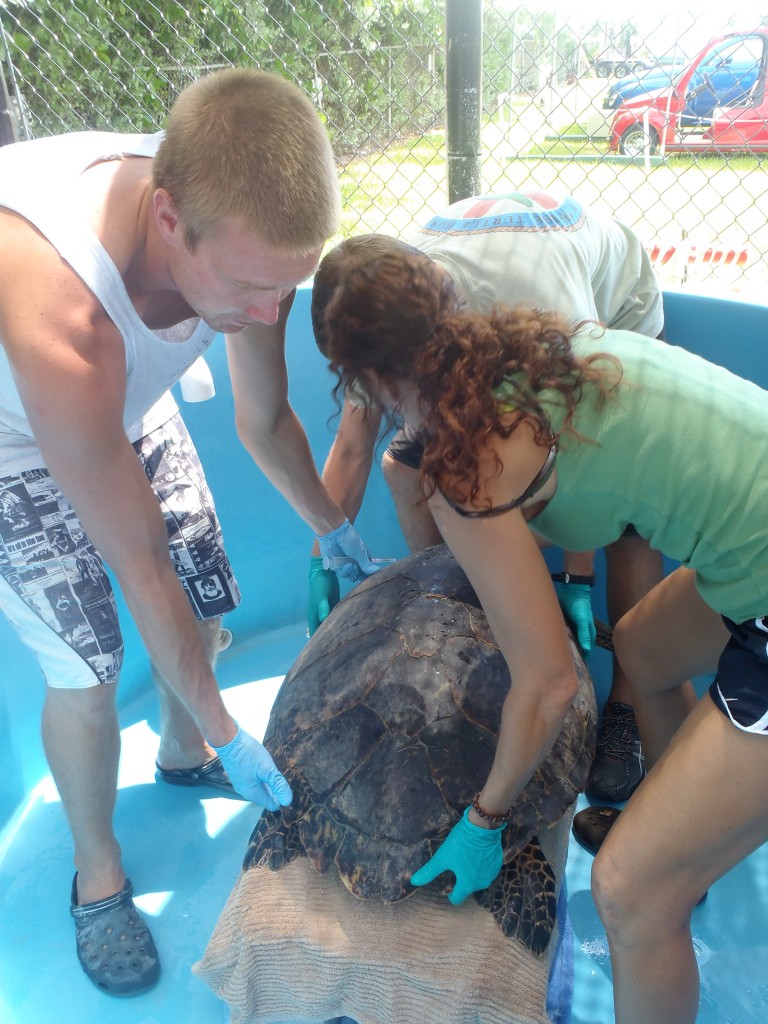 The initial stages of preparation included putting together the “birthing table” which consisted of a padded Boogie board resting atop a stack of cement blocks. Good Hope was shifted so that her rear hung off the edge of the table. A bowl filled with sand from St. Croix was positioned to catch and cradle any falling eggs. 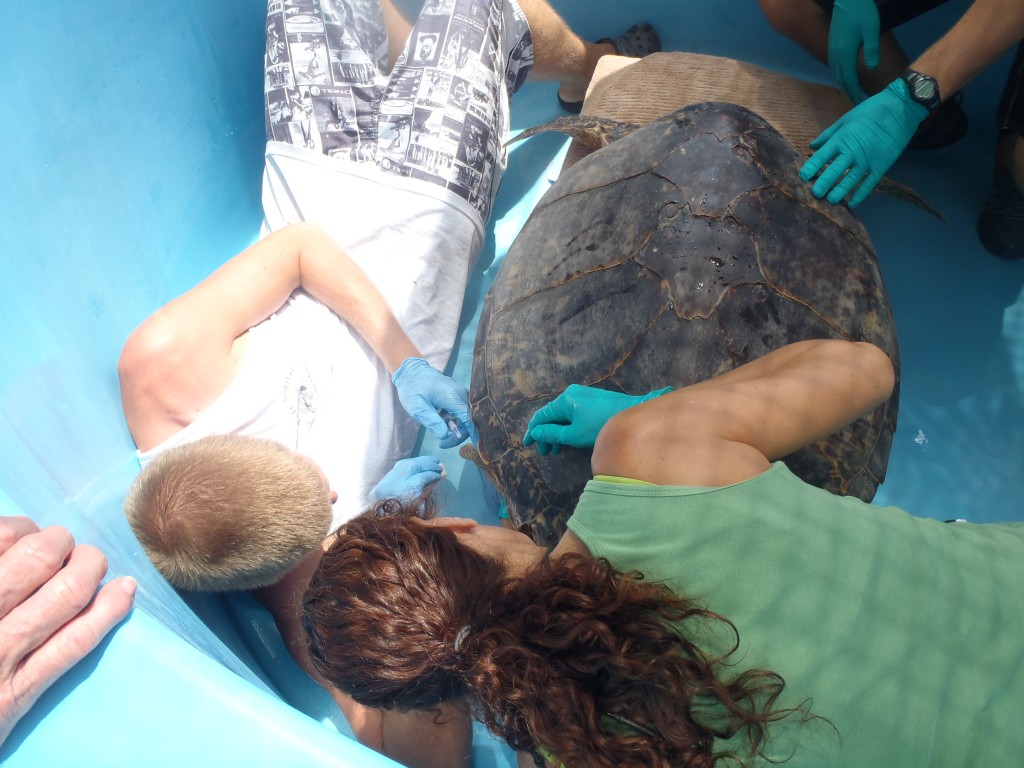 Rehabber Gunnar Zollinger administers an injection that gets the uterus ready for labor. Manager Bette Zirkelbach restrains the rear flipper near the injection site.

A dose of calcium gluconate was administered one hour before the Vasotocin as the former drug readies the uterus for labor. During this 1-hour “waiting” period, Rehabbers busied themselves by pouring sand into Styrofoam egg incubators and setting up observation posts from outside and within the tank. 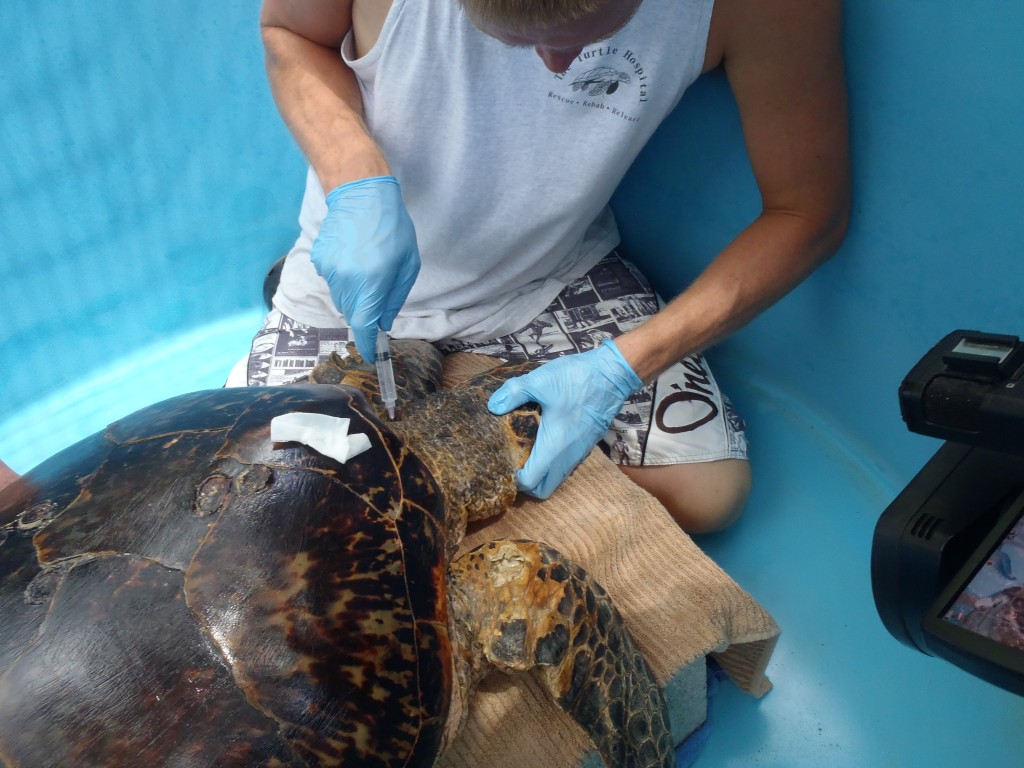 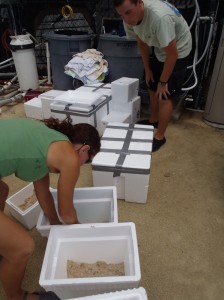 Sand from St. Croix is transferred into egg incubators while the Rehab team waits for the contractions to begin.

Rehab staff remained with Good Hope during this time, continuing to record observations and monitor any progress or decline in the turtle’s condition. Dr. Doug came in to examine the turtle and gave her an injection and lubrication that would help to relax the muscles of the cloaca and hopefully allow the eggs a better chance of passing through the egg canal. 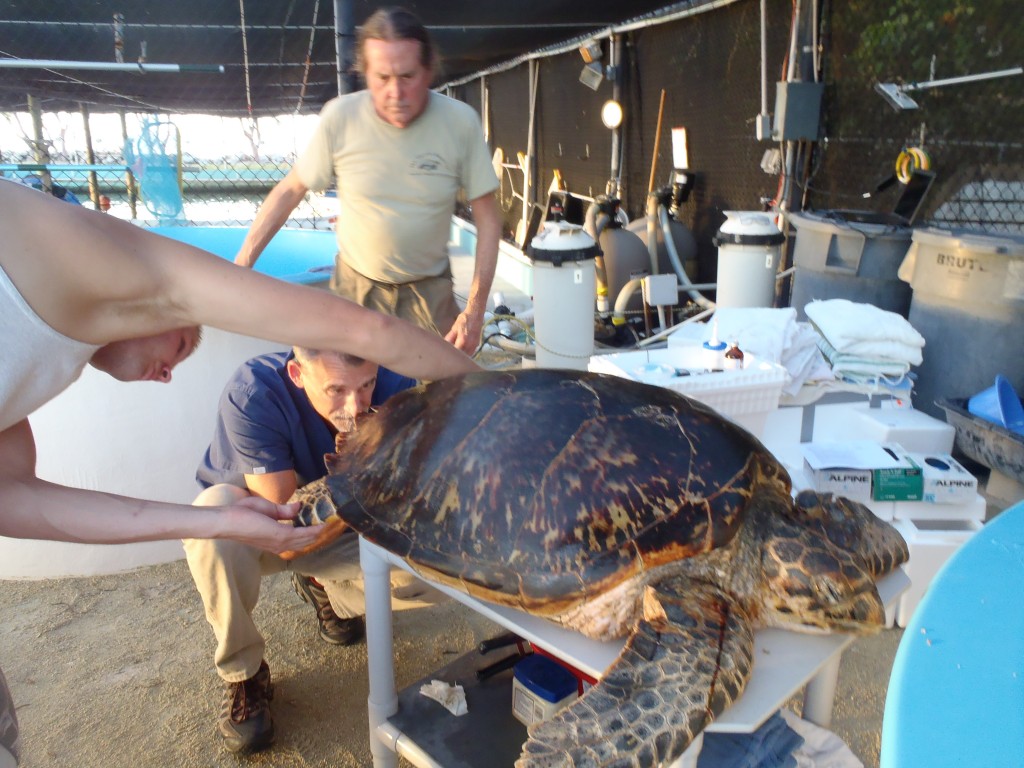 Dr. Doug Mader applies lubricating jelly and administers a muscle relaxant injection to make it easier for the eggs to pass through the egg canal. 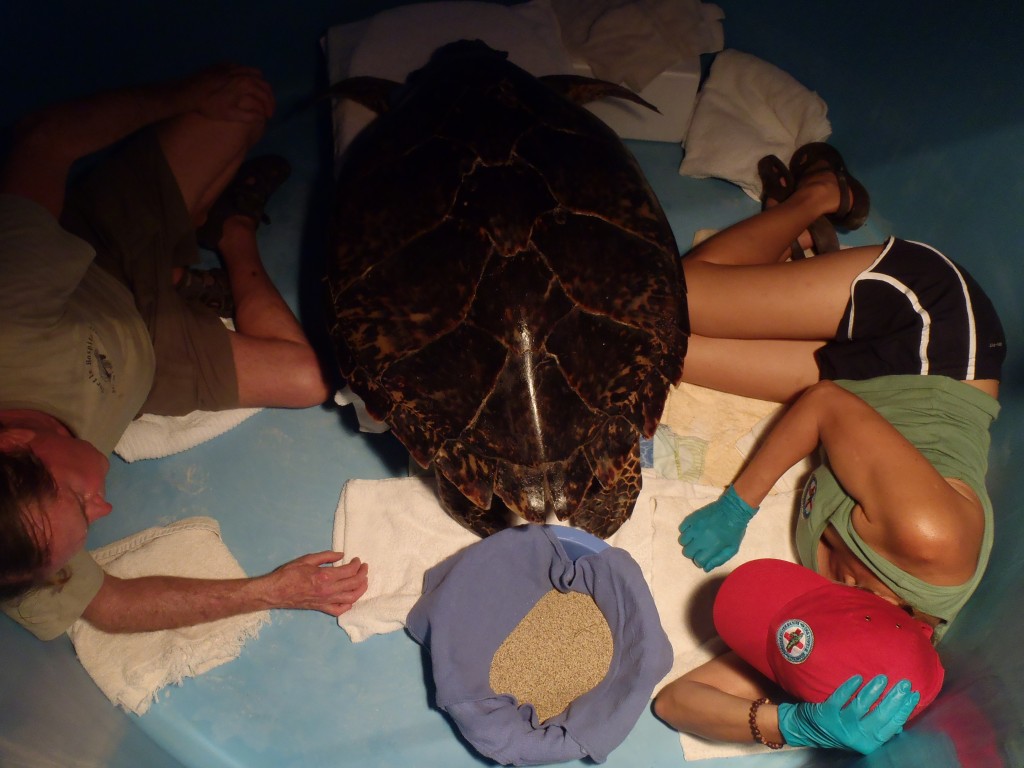 As dark settles in, the Rehab team continues to check to for contractions after the second dose of Vasotocin.

Once the second dose of Vasotocin was administered, Rehab staff again settled in for around the clock care well into the night hours. Lacking sufficient light in the enclosure to view and record contractions, we switched on infra-red lighting with the hope of not disturbing the turtle’s labor process. While the contractions did strengthen and close in to only 5 seconds apart, no eggs were expelled last night. 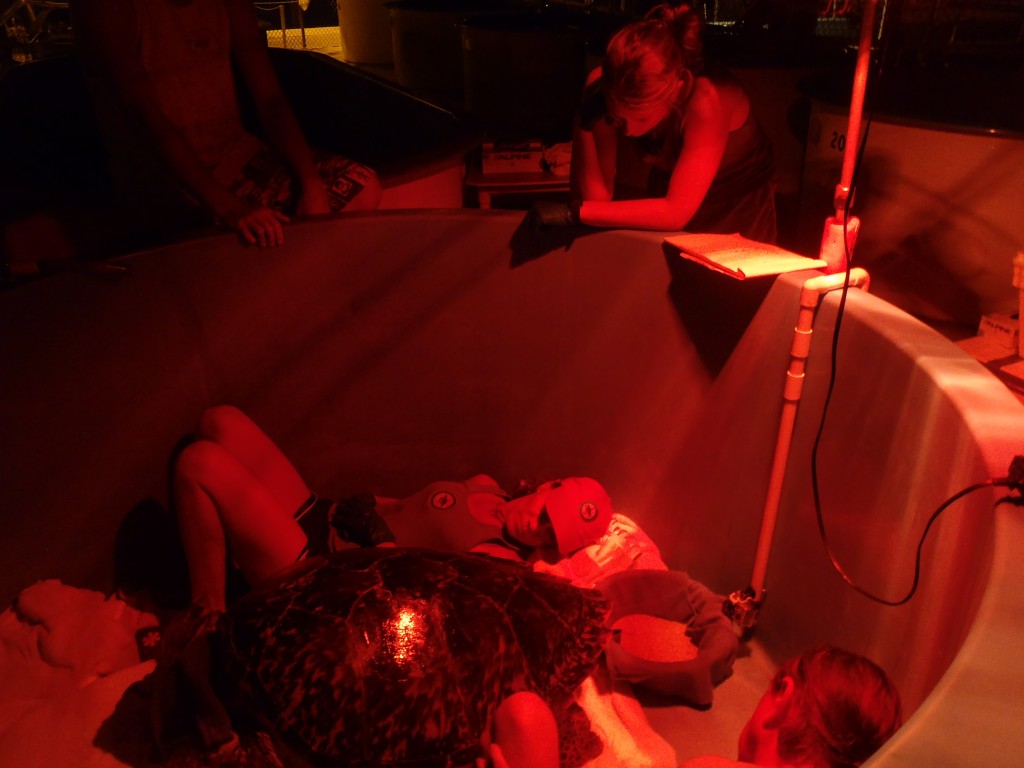 Infra-red lighting is turned on to assist manager Bette Zirkelbach and founder Richie Moretti in viewing Good Hope’s contractions, which are indicated to Rehabber Stacey Venzel for recording of the exact time. Red light filters can be placed along beaches to diminish artificial light pollution for nesting and hatching sea turtles.

Good Hope’s medical situation is complicated, and we are reaching out to the sea turtle world so that we can give our patient and her eggs the best chance of survival. We hope to induce labor again in a few days after more doses of Vasotocin have been ordered. Additionally, we will likely re-locate the turtle to an area that has less noise and light disturbance.

Most species of sea turtles, hawksbills included, nest at night when disruption of the egg laying process is least likely. That being said, the slightest noise disturbance, natural or unnatural, can cause a contracting turtle to hold in her eggs and cease laboring. Our day and night attempts heard the sounds of lawn mowers and helicopters as well as passers-by and other commotion, so we are hoping to start again where silence can best be assured. Remember to check back tomorrow for updates, and to keep hoping the “good hope!” 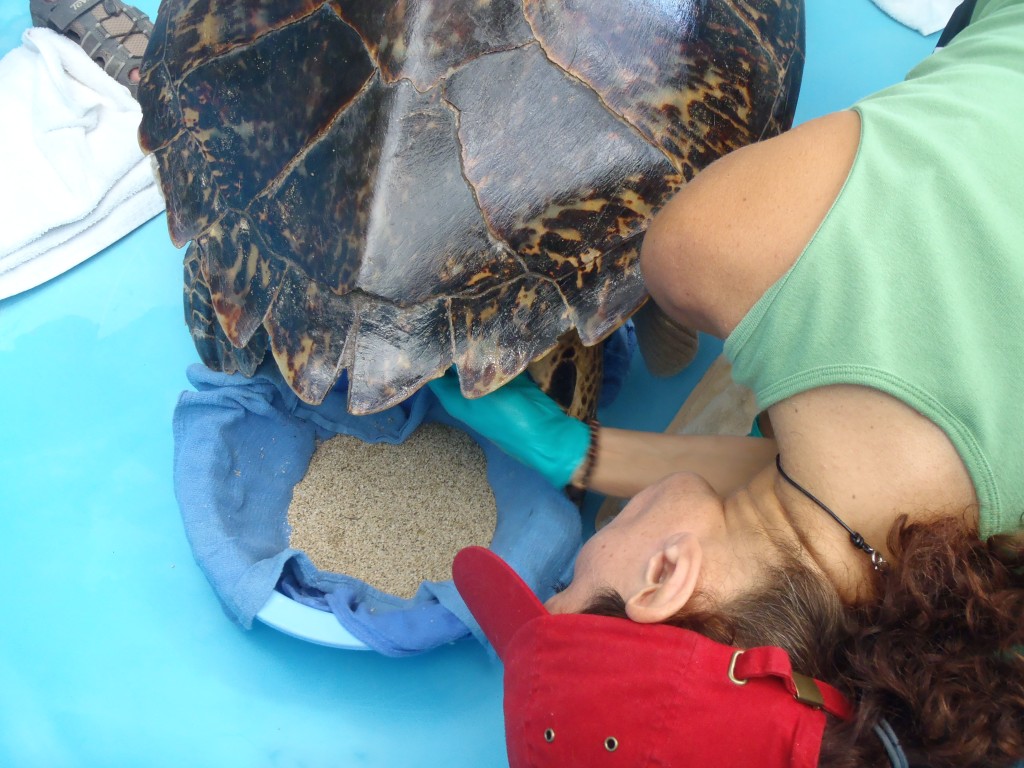