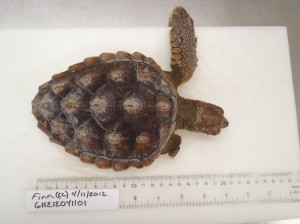 Itty bitty washback post-hatchling, Finn, was found floating in a bed of seagrass on April 11th–with only one fully functional flipper!  This loggerhead is probably a couple months younger than our education turtle, Fisher.  The two are now tank neighbors!  Only Finn’s front left flipper is fully intact; the front right flipper is a nub down to the elbow.  Both back flippers also show signs of a predator attack with 50% of each flipper missing. Finn also came in with some small puncture wounds on the plastron and carapace.  But a turtle that came to us nearly flipper-less but still alive is a rarity!  Finn is one example of the resilience and adaptability of sea turtles, perhaps why they’ve managed to survive since the prehistoric era.