Wednesday, February 12th was a big day for the stranding hotline at the hospital with two turtles being admitted within hours of each other.  The first call came from Holly and Mike in Grassy Key.  They had been enjoying their morning coffee when they noticed a large green sea turtle with fibropapilloma turtles aimlessly swimming around in the shallow mangrove waters behind their house.  They had heard about the dreaded FP tumors so they called us here at the hospital and rehab specialist, Devin, responded to the call.  In order to get the turtle later named “Pe’e” some help, Devin decided getting in the mucky mangrove water would be her best bet.  When she stepped in, she immediately sank into mud up to her knees.  After battling the knee deep mud, Devin finally reached “Pe’e”, netted him and battled with the 55 lb turtle to get him on a nearby kayak, Mike and Holly had launched just in case.  “Pe’e” was reeled in and taken to recover at the hospital.  His first surgery is scheduled for later this week if his blood levels are strong enough to undergo anesthesia. 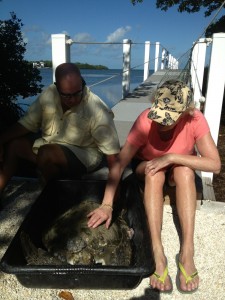 Mike and Holly with “Pe’e”

The second call came five hours later from Karen, a biologist for FWC, who had a friend down in Big Coppitt Key continually seeing a little green sea turtle, also covered in FP tumors, floating at the surface.  Devin responded yet again and met Reeves and Amadore behind their apartments to investigate.  Sure enough a little green with tumors, later named “Captain Morgan”, was floating around in a canal looking very lethargic.  Devin hit the water again this time in a kayak with a net to try and get the turtle the help it needed.  After countless misses of trying to net the lethargic but fiesty turtle, Devin decided another plan of action needed to commence as the sun was quickly setting.  Reeves volunteered to get into the water and try to net the turtle by sneaking the net up from under “Captain Morgan” as he floated at the surface for his breaths.  Sure enough the plan worked and Reeves was able to get “Captain” in the net and Devin pulled him aboard the kayak.  “Captain Morgan’s” tumor load is very abundant and because of this his blood levels are very low.  In order to get him into his first surgery to have those tumors removed he will need to have a few weeks of antibiotics and fluid therapy along with getting some nutrition into him. 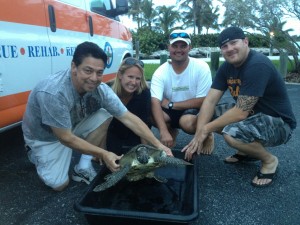 “Captain Morgan” and “Pe’e” are not thrilled with their variety of food here at the hospital and are still very weak so we have been tube feeding them a nutritional formula to get them strong enough to eat.  Both turtles continue to slowly show improvements and we have high hopes for both of them.  Thank you Mike and Holly who rescued “Pe’e” and to Reeves, Amadore, Karen, and Matt for helping in the rescue of “Captain Morgan”.