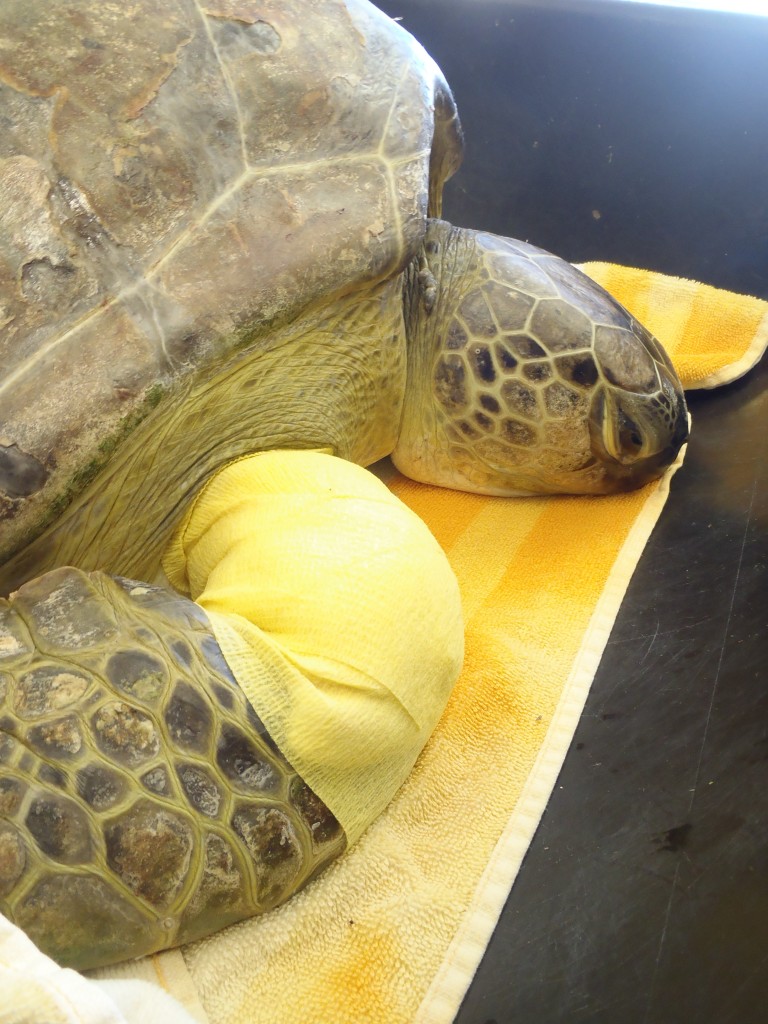 Jimbo looks like a different turtle without the massive FP tumor hanging off his front flipper! Here he is pictured recovering post-op. 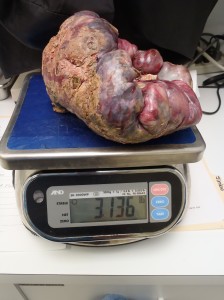 That is one giant tumor! Weighing more than 3 pounds, this was the biggest tumor to have been removed to date by The Turtle Hospital.

Previously, the largest tumor The Turtle Hospital had ever removed weighed 535 grams.  That tumor had been hanging off of the rear flipper of S.A.S, a juvenile green.  S.A.S. was released in May of this year.  In comparison, Jimbo’s tumor wins first prize at a whopping 1431 grams.  A second surgery will be required to remove smaller tumor growths as well as to clean up the surgery site of the large mass that was lasered off this morning.

Additional turtle patients–of varying sizes–went through our operating room yesterday.  Hunter had an endoscope performed in an attempt to extract the 2 remaining hooks from inside the esophagus.  Because the hooks are so heavily embedded, only half of one was able to be taken out, and one still remains deep inside a front flipper. 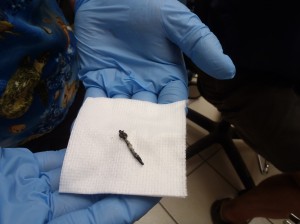 Part of a fishing hook was able to be removed during Hunter’s endoscope procedure. Unfortunately, the remaining hooks would require too invasive a surgery, indubitably leading to future infections.

Over time, these hooks should degrade (as they are the “cheap” kind, not made of stainless steel) but Hunter will have to stay on antibiotics until he is no longer vulnerable to infection.  The lump on the top of his neck was also removed and is being sent out for a biopsy. 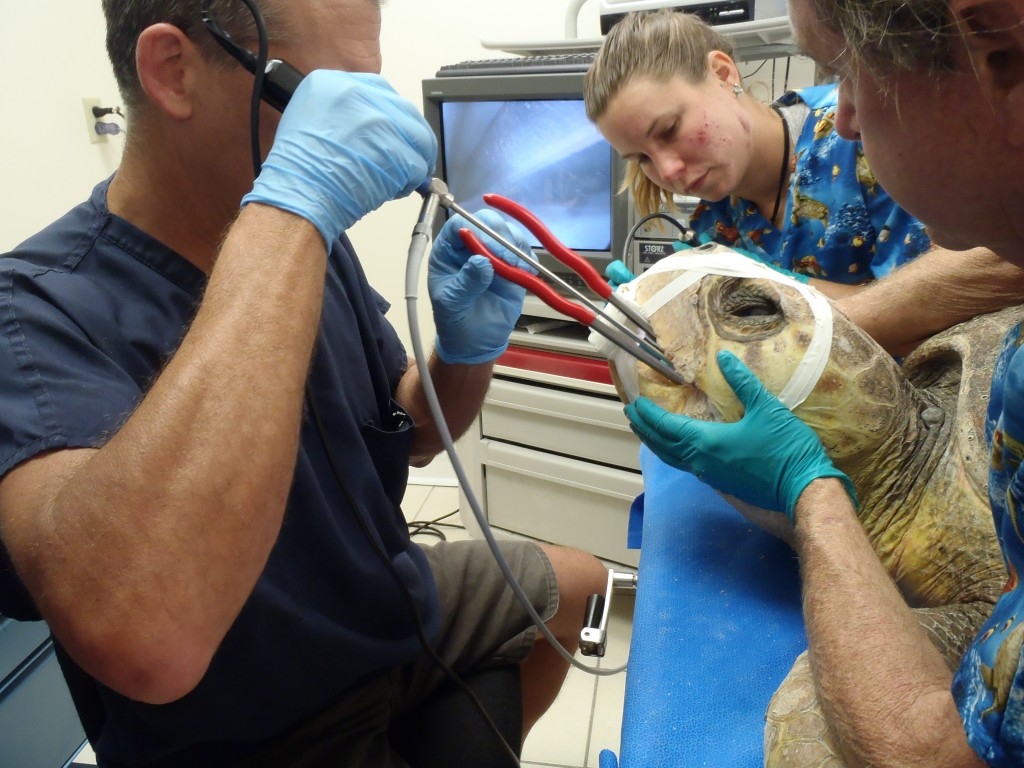 On a smaller note, tiny Timmy underwent surgery again this week.  An endoscope on Monday checked for internal paps.  Finding none, we did discover a sharp, green, foreign object in the turtle’s intestines.  Laser surgery of the external paps was postponed from Monday to yesterday with the hope that we could remove the debris.  Unfortunately, Timmy’s small size and the delicate position of the object in the GI would call for too invasive of a surgery, one that would be detrimental to her health.  (Yes, that’s right–“Timmy” is a girl!)  We were able to zap off the eye tumors at this time.  For now, Timmy’s diet will consist of a fair amount of lactulose as the Rehab team strives to ease nature’s role in passing the garbage out of the turtle’s system.  At this point, we can only hope that the trash will exit safely, without perforating any intestinal lining! 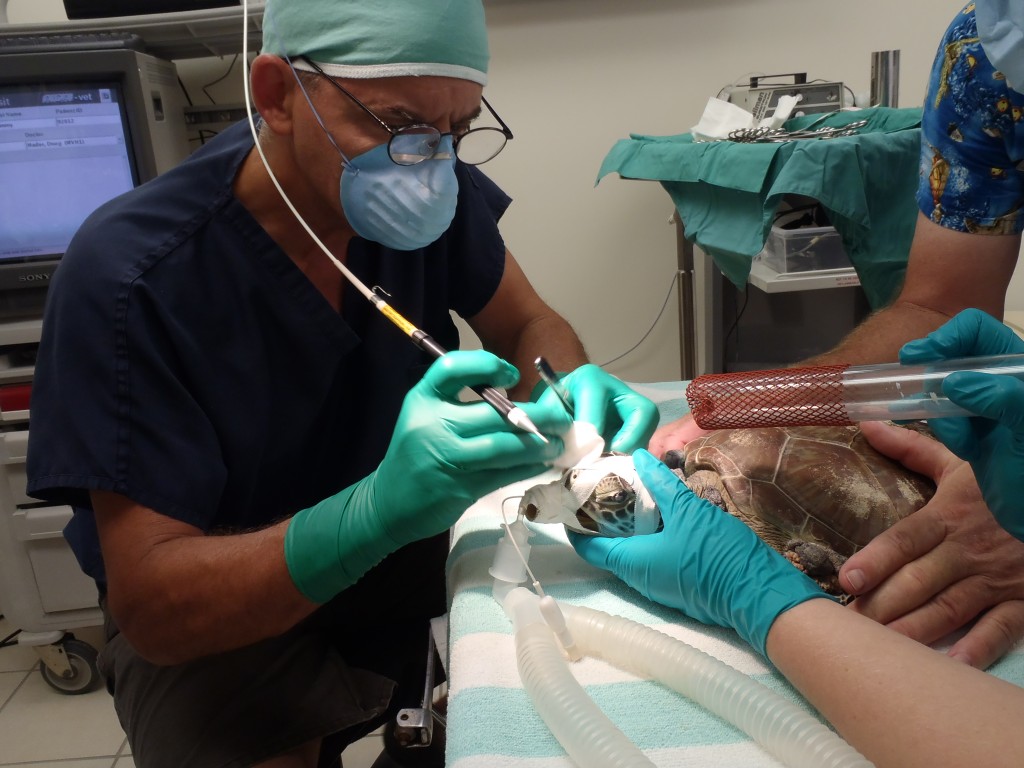 Our veterinarian, Dr. Doug Mader, removes the tumors from Timmy’s eyes. With luck on Timmy’s side and the expert skills of our vet, the turtle still has both eyes intact!