Home  » Current Patients Blog » ‘Tis the Season to Save Turtles

‘Tis the Season to Save Turtles

The weather outside is chilling, and our ER is a filling…all hands are on deck caring for sea turtle patients at the Turtle Hospital.  Almost every day for the past week, we have gotten a new turtle. Last Saturday, we had 2 new turtles! Some (like Barnacle Bill) are very active while others (like Charlie and Frumpy) are a more subdued.

Keeping an eye on X (left) and Charlie (right). Unfortunately, X did not make it. But Charlie is still doing good.

On 12/13, we admitted our largest turtle, Tiny! He was found by Scuba-Do in Key Largo. They noticed that the turtle was floating sideways, so they called us. They told us it was a large turtle, but we were not expecting 265 lbs! So of course, they named him Tiny. When we took x-rays, we noticed that he has a large impaction and lots of gas in his intestines. This causes him to float on one side, so we attached “floats” to the opposite side to even him out. It will take a couple weeks for the medications to start working and for him to start passing that gas. 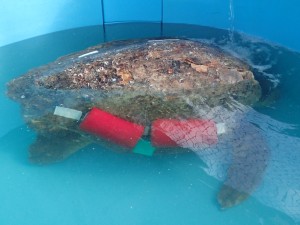 Tiny with his floats.

Another interesting case is Frumpy. He has an old boat strike to the rear of his shell. It has healed remarkably well, but we’re still keeping an eye on it. He also has another crack near the front of his shell. Frumpy is currently floating, but we do not know if that is from gas in his intestines or from the boat strike; so we do not know yet if he will have to become a permanent resident. Because Frumpy is so skinny, we are working slowly to get him healthier. 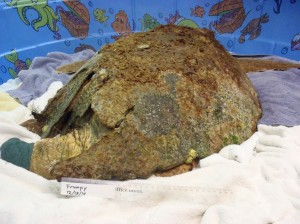 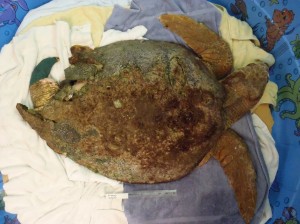 This is only the beginning of care for these turtles. Keep checking back for updates!