Yesterday was a busy day at The Turtle Hospital.  Three of our turtle patients were pulled from their rehab tanks for medical examinations, two of which involved sedation for surgical procedures. 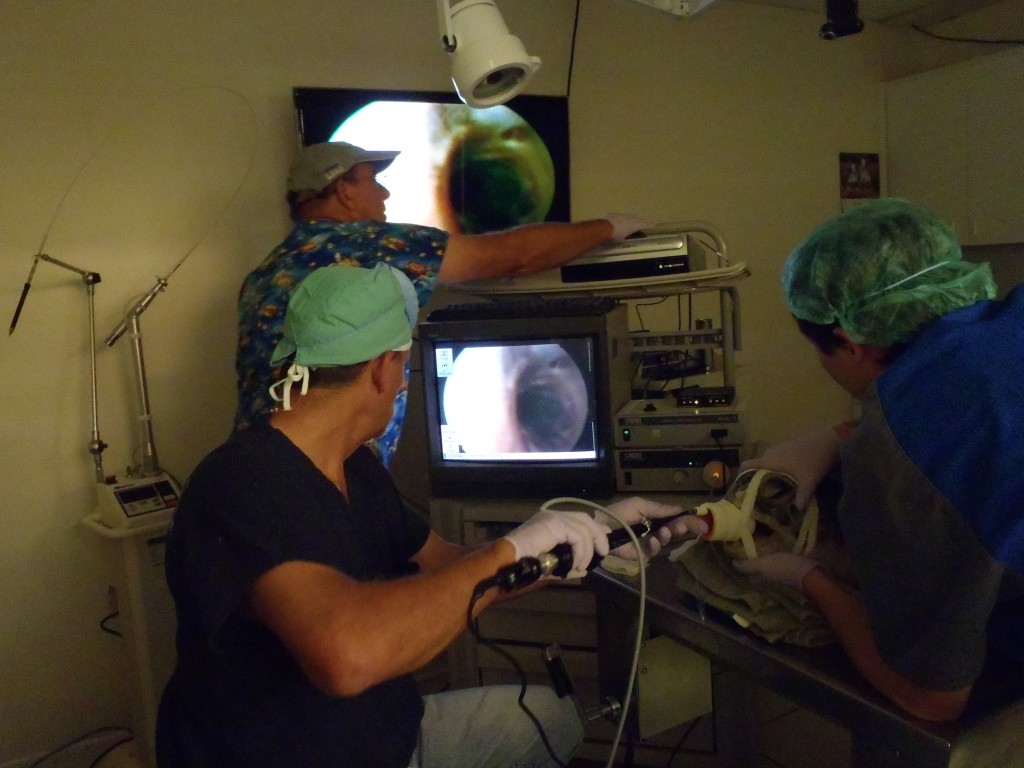 Dr. Mader uses an endoscope to look inside Stella’s lungs.

First, Dr. Doug Mader performed an endoscope of Stella’s lungs.  This adult female green was rescued about a week ago, reportedly listing to one side.  The “bronchoscope” revealed a significant difference between the sizes of the two bronchi.  The airway begins with the trachea which branches into two bronchi, each a passageway for air into one of the lungs.  The right bronchi was found to be much smaller than the left.  Common sense would therefore suggest that less air is able to pass through into the right lung at one time.  Stella’s tilt could be due to imbalanced air pressure between the lungs.  Additionally, a biopsy was taken of a granuloma found in the right lung and a fluid sample was sent out for cytology as well.  Watch the video of Stella’s lung endoscope, termed a “bronchoscope,” by clicking here.  The endoscope tools travel in and out of the trachea, through one of the bronchi and explore the lungs.  Notice the healthy coloration of the left lung versus the gloomier coloring in the right lung, likely due to a past bout of pneumonia. 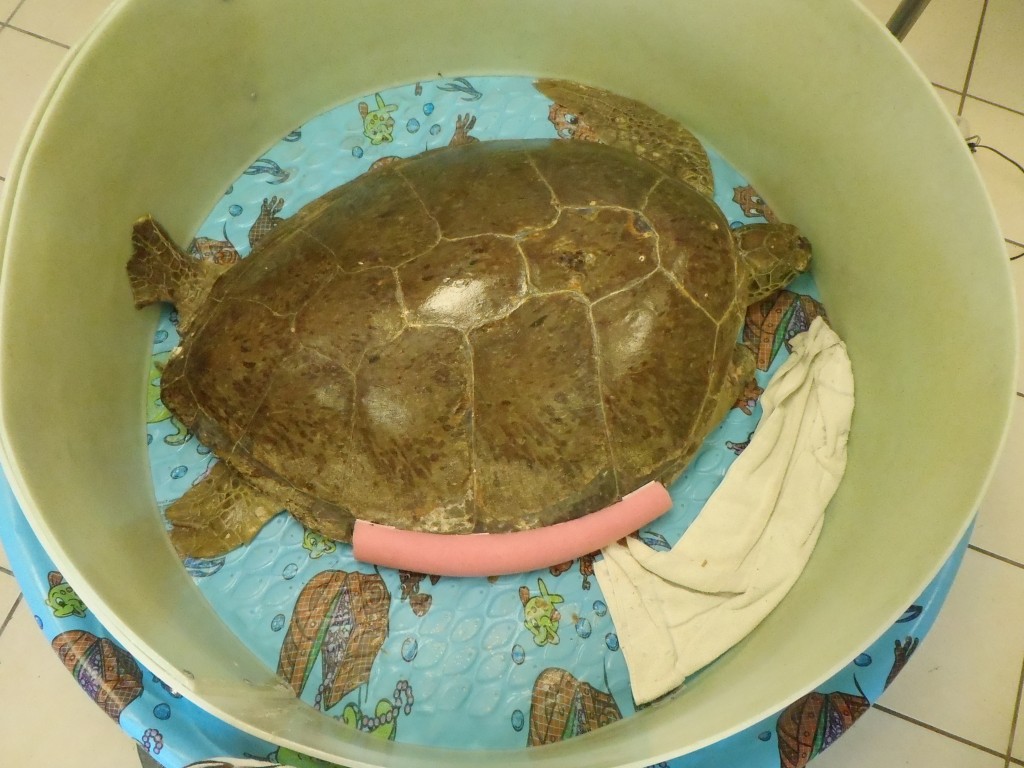 A swimming noodle was modified to act as cushioning for Stella’s plastron, since she is so emaciated that sores could easily form from rubbing on the tank bottom. Notice a pink color was chosen to emphasize her femininity, as we know she is an adult female!

Post-surgery, a floatie was attached to Stella’s carapace to keep her plastron from rubbing on the bottom and aid with balancing in shallow water. 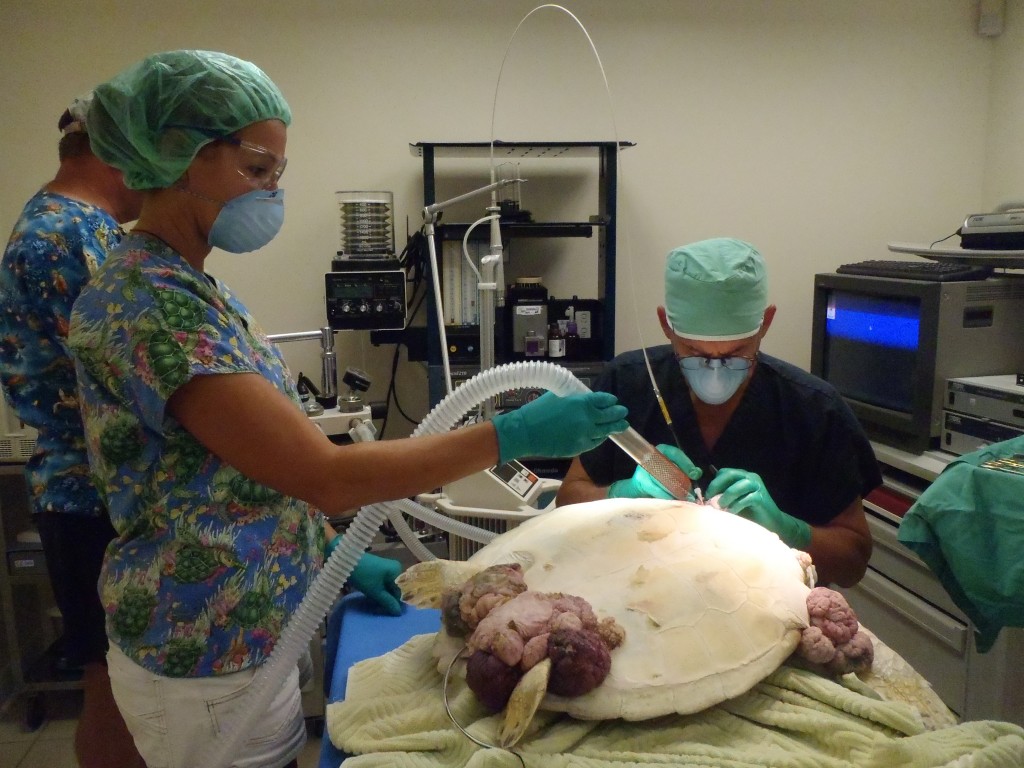 Barrett’s heaviest FP load was clustered around the cloaca, but a laser also removed tumors from around the front flippers. Dr. Mader led the surgery assisted by Turtle Hospital manager Bette Zirkelbach.

After Stella’s procedure, Dr. Mader removed the remainder of Barrett’s fibropapilloma tumors.  This was Barrett’s second surgery, and an amazing mound of tumors was removed from the cloaca and front flipper regions.  Barrett lost a lot of blood and is currently recovering with a lot of bandages and gauze to initiate clotting. 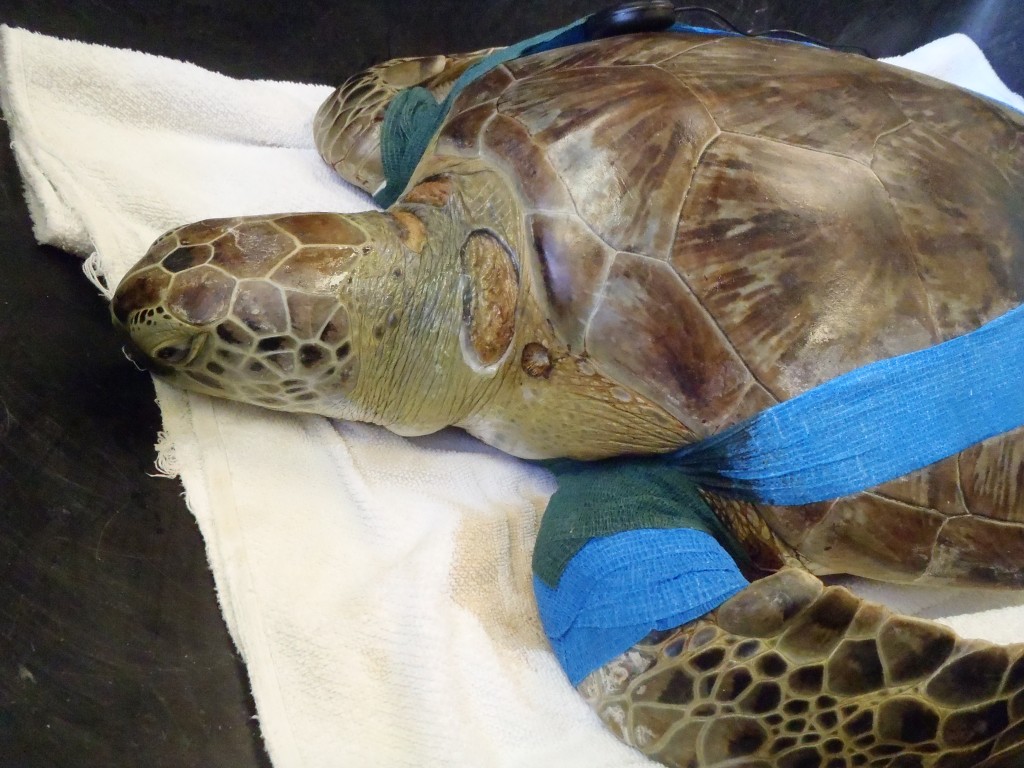 All banadaged up, Barrett recovers in the ER. Notice the scars on his neck from his first FP removal surgery.

Lastly, Hunter was given a thorough look-over to assess the possibility of future procedures for removal of the remaining three fishing hooks.  He has developed some abscesses under his lower jaw that will be cleaned and monitored daily as we continue to pry open his jaw for feeding and therapy. 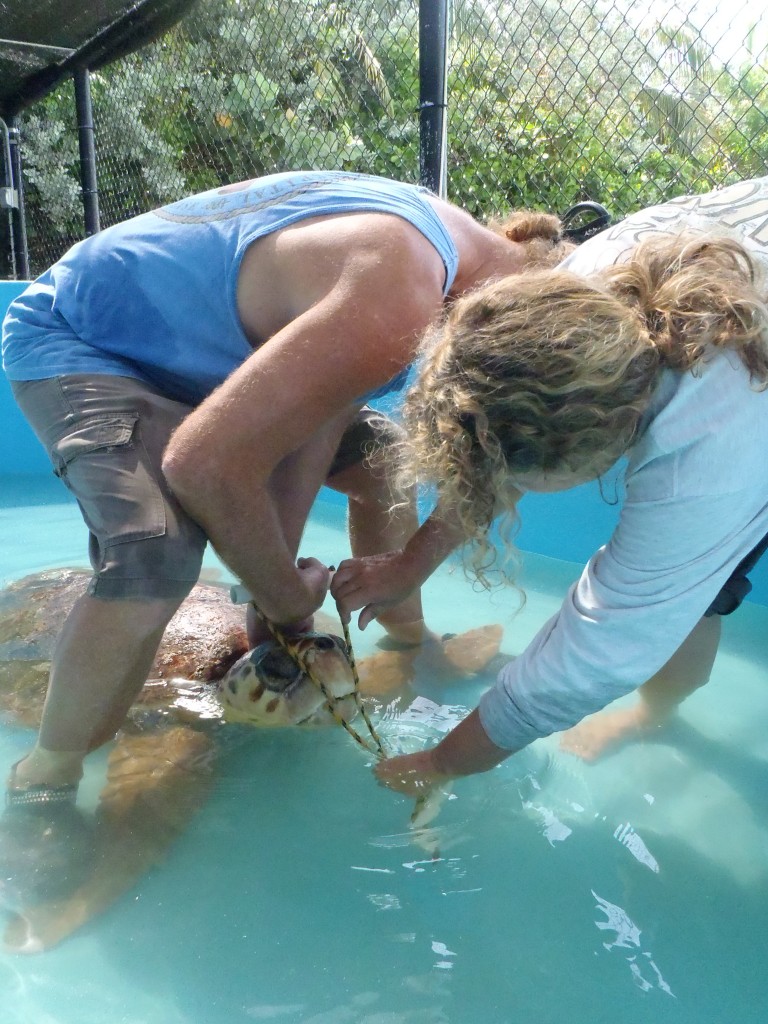 Hunter receives his morning lockjaw therapy, with Jim Weidman of our Rehab Team and Sue Schaf of FWC performing the stretches.