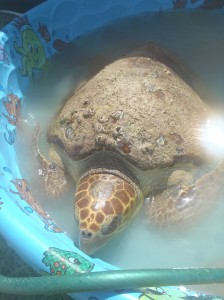 Another loggerhead arrived at the Turtle Hospital after being picked up by FWC during the annual at-sea research.  A blood sample onboard showed the turtle to have a low PCV, classifying it as severely anemic.  Once in the ER for examination, a second blood analysis confirmed the poor blood chemistry.  Additionally, x-rays showed an impaction of particulate matter, likely sand and small marine debris.  The turtle was named “Nicole” by NOAA’s sea turtle pathologist Dr. Brian Stacy who was part of the research-turned-rescue team.  Currently, Nicole is receiving iron injections to improve her blood chemistry as well as good doses of Bean-O and lactulose to pass the impaction.  She was lucky to be caught before her health worsened, and we are very grateful to FWC and NOAA for bringing her to us for rehab!