Food is always the great motivating factor but just like humans some turtles can be picky eaters while others will eat anything in front of their face. Each turtle at the hospital has a diet specific to their needs. The green sea turtles, typically vegetarian in the wild, eat diets that are rich in veggies like romaine lettuce and bell peppers during their stay at the hospital. However some of our green sea turtle require diets high in protein and can be seen eating capelin and squid in addition to their veggies. 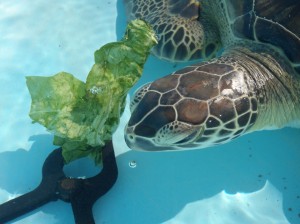 Daisy, a green sea turtle, getting ready to eat her romaine lettuce.

Our Loggerhead’s, Kemp’s and Hawksbill’s diets consist of combinations of squid, capelin, and mackerel, but even some of the loggerheads like Zippy and Rebel enjoy a romaine lettuce snack here and there. Although, we think for Rebel, the game is just about stealing the lettuce from the greens, not so much that he enjoys it. A typical diet for loggerheads would consist of hard-shelled invertebrates, and the largest loggerhead at the hospital will eat nothing but the best, lobster! Tiny, an approximately 270 lb. adult male loggerhead turns up his nose to anything but a lobster tail. Tiny is being treated for a boat strike injury and intestinal gas. To make the digestive process easier for him, the staff needs to remove the lobster tails from the shell for Tiny; can we say spoiled sea turtle! We are also caring for Frumpy, a 130 lb. adult male loggerhead that came into our care because of severe boat strike injuries. Frumpy only eats mackerel and they must be filleted and skinned before he will eat them and, of course, that is exactly how he gets them. 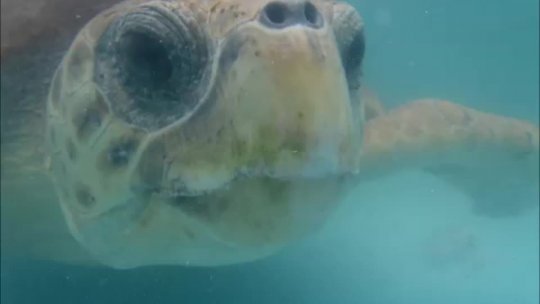 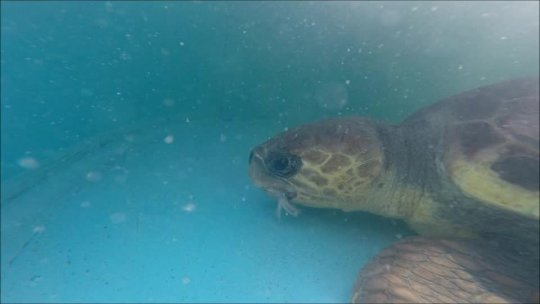 One of the most exciting events recently in turtle diets is our beautiful Patti. Patti is finally eating on her own after 4 months! Patti, a 130 lb. sub-adult Loggerhead, arrived back on August 13th  with pneumonia, an old boat hit, lockjaw, ulcerated eyes, and a severe bacterial infection. For the first 4 months, Patti was unable to eat on her own due to lethargy and lockjaw. During this time, she was tube fed and also had to receive intravenous nutrition, sometimes several times a day. During December, Patti was finally able to swallow solid food, but staff had to open her mouth for every single bite. The rehabbers would place small pieces of food on her tongue and wait for her to swallow; sometimes it would take up to 30 minutes for one piece. Patti’s care required staff’s attention constantly during the day; we didn’t leave her for a moment during the first couple months. After lots of hard work we received the best Christmas gift we could have ever received…on Christmas Eve she finally was able to open her mouth far enough that she was able to eat on her own! 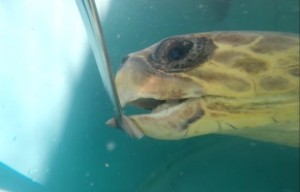 We also have the turtles that meticulously inspect each piece of food before eating it to make sure we haven’t tried to sneak any of their much needed medications in there without their knowledge. The Grinch, another one of our loggerheads, eats every bit of his food but will locate every pill of Beano being given to him to treat his intestinal gas and spit them out, before swallowing his fish. There’s no sneaking anything past The Grinch. Sometimes it is a challenge to find exactly what these turtles want to eat but every bit of hard work pays off when we see the them becoming healthy, gaining weight and getting closer to release every day.