President Jimmy Carter and family joined the Turtle Hospital Staff on a beautiful Tuesday in the Keys to wave good-bye to one of our favorite turtles, Danger.  President Carter stopped by and toured the facility and met all 29 of the hospital’s current patients. Some lucky people visiting the facility on the 10am education program even got to catch a glimpse of the United States 39th President! Jimmy Carter was the only President to recieve the Nobel Peace Prize after his presidency. He recieved the award in 2002 and has long been considered a great humanitarian. Although this was not President Carters first trip to the Florida Keys, it was his first visit to The Turtle Hospital. President Carter and his entire family were thrilled to participate in Dangers Release! 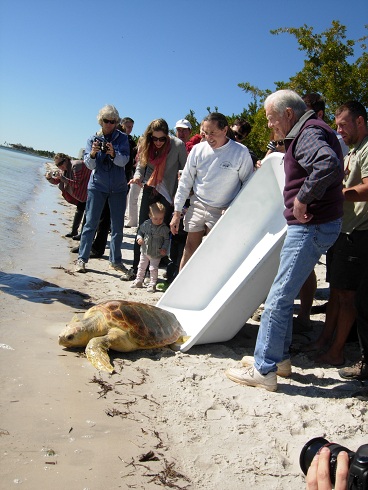 Danger a 100-lb Loggerhead was released off Coco Plum Beach in Marathon around noon on December 28th.  Danger was originally brought into The Turtle Hospital in early September by Danger Charters because he was found floating off of Key West.  Once at the hospital Danger was found to have a slight impaction, meaning something he ate did not agree with him causing a build-up of gas in his body.  He quickly recovered at The Turtle Hospital where staff feed him squid with vegetable oil to help the impaction, and antibiotics to rid any infection Danger might have.  Good Luck to Danger and a special thank you to President Carter for joining us on this special day.