Dawn Gets To Go Home 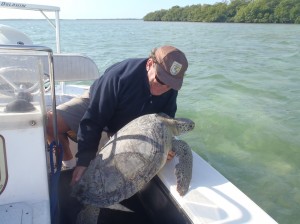 Dawn dives off the side of a boat back into the ocean.

Dawn was finally able to be released after being here at the hospital for over a year.  He was originally brought in as a juvenile green sea turtle with fibropapillomatosis.  He had tumor like growths that were removed using a CO2 laser.  After he recovered from surgery, we still cared for Dawn for the following year. We kept Dawn here in order to check him monthly to be sure that the tumors would not come back.  Dawn never had any regrowths, so he was approved for release.  We took him back to the same location he was originally picked up off shore Key West.  Dawn was released twenty pounds heavier and very healthy. Good luck Dawn!