Less than a week after admittance to The Turtle Hospital with a right front flipper entanglement, Farley underwent an amputation surgery.  The crab trap rope had been wrapped around the turtle’s flipper for quite some time out in the wild, cutting off circulation so that bone and tissue began to rot away.

Dr. Doug Mader performed the surgery (having flown in from Alaska the night before!).  He was assisted by Rehab staffer Marie Simpson. 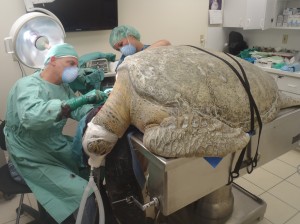 The 370-lb female green is recovering quickly in a lap tank in our rehabilitation enclosure.  She began swimming the moment she was placed in water–a rarity for an animal that has just had a limb removed!  We will continue to closely monitor the surgery site, having high hopes that Farley will be released in a few months! 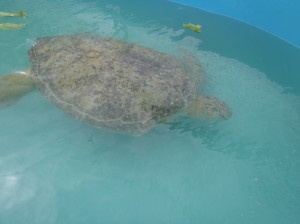