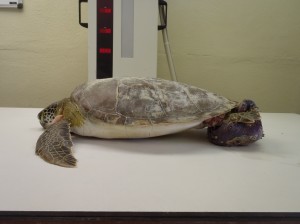 S.A.S. upon arrival at The Turtle Hospital. Note the massive FP tumor on the rear flipper.

Florida Governor Rick Scott recently made a trip to the Keys where he stopped at The Turtle Hospital.  During his visit, the governor helped release S.A.S., a sea turtle that was found entangled in a lobster trap line, covered in fibropapilloma tumors. Click the link above for more on S.A.S.’s release as told by CBS Miami news.