On February 23, 2015 Turtle Hospital Founder, Richie Moretti and Rehabilitator Alastair McArthur took 5 Hawksbill hatchlings and 1 hawksbill post hatchling far off shore for release. These were the last of the hatchlings we received in 2014. They were taken out to the lines of  Sargassum seaweed where they will be able to find food and protection until they are big enough to venture away from the sea grass on their own. 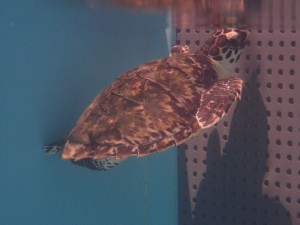 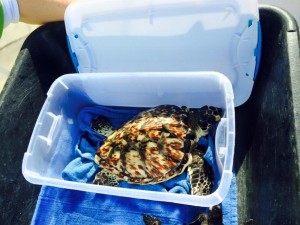 Mocho, pictured above, was rescued on April 7, 2014 in a canal on Stock Island. We believe he had washed back in from the sea grass lines and got stuck. He was also missing his front left flipper, probably due to a predator attack. We kept Mocho at the hospital as he worked on perfecting his swimming skills with only 3 flippers. He was able to demonstrate his ability the swim and dive with no struggling so it was time for him to return to the ocean. Good Luck Mocho, we will miss you! 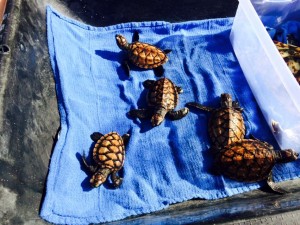 In early December we received the last of our 2014 hatchlings. These hawksbills were hatched on the beaches of Bahia Honda State park but were unsuccessful in exiting their nest. They were rescued by the park rangers and brought to out hospital for rehabilitation. Every nesting season we rehabilitate and release over 100 sea turtle hatchlings that don’t make it out into the ocean on their own.