The Turtle Hospital received an urgent call from Capt. Keith Daniels onboard his boat Trouble. A large sea turtle was in trouble, caught up in 2 trap lines and dragging them behind her. Turtle Hospital administrator Ryan Butts and rehabilitation specialist Andy Dobrowloski responded to the call, suprised to find a nearly 500 pound Leatherback just off of Bahia Honda State Park. The typically pelagic sea turtle spends the majority of it’s life in the middle of the ocean, traveling great distances and thriving in deep open ocean. This was only the third Leatherback rescue in 25 years for the Turtle Hospital. They are critically endangered and incredibly rare to see inshore. Fortunately, the injuries were not catastrophic and she was released on site. 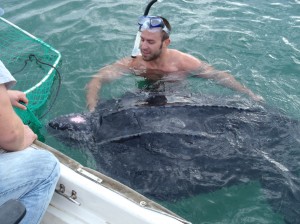 Once free, she sat there along side of the boat for at least two minutes while she allowed amazed staff to pet her head and shell. After two minutes, she had enough and took off like lightning.