The Turtle Hospital recently admitted our first leatherback sea turtle to the facility. The giant leatherback maxed-out our scale; weighing in at over 600 pounds and nearly 7 feet long. He was by far the largest patient the hospital has ever treated. Two fishermen found the leatherback with it’s right-front flipper entangled in the buoy line of a lobster trap. Sharks were spotted circling the turtle as the fishermen approached, and they noticed it was missing it’s left-front flipper entirely. Upon realizing this very rare animal required urgent care, they called the Turtle Hospital. The fishermen protected the turtle in it’s inescapably perilous condition until staff arrived to help heave the massive creature into the boat.

The leatherback sea turtle is a pelagic swimmer, which means it is usually found only in deep, open water – usually beyond the continental shelf. The waters of the Florida Keys are relatively shallow and are only rarely frequented by leatherbacks. This turtle was probably passing through the Florida Straits, travelling between the Gulf of Mexico and the Atlantic Ocean, when he was snagged by the buoy line. In the struggle to free himself, sharks were alerted to his presencea shark or possibly several sharks, severed his now missing flipper.

The first challenge was to address the animal’s injuries. The front-right flipper was damaged due to the entanglement, however it was indeed functional and our surgeon, Dr. Doug Mader, was able to save the flipper. The front-left flipper however, was entirely absent and was treated as an amputation. The second challenge was to find an appropriate tank to house the 600-pound turtle. The Hospital was only two days from completing the construction of two brand-new 30,000 gallon emergency tanks when Schaft arrived. Either of which would have been perfect. Leatherbacks, being pelagic swimmers, require very large tanks, so large in fact, that very few leatherbacks have ever been successfully rehabilitated in captivity. Without the ideal tank, we enlisted the help of our friends at The Dolphin Research Center about 10 miles north on Grassy Key. Once there, we placed Schaft into a very large pool with the aid of a forklift. Once gently placed into the massive tank, Schaft was monitored on 24-hour watch. 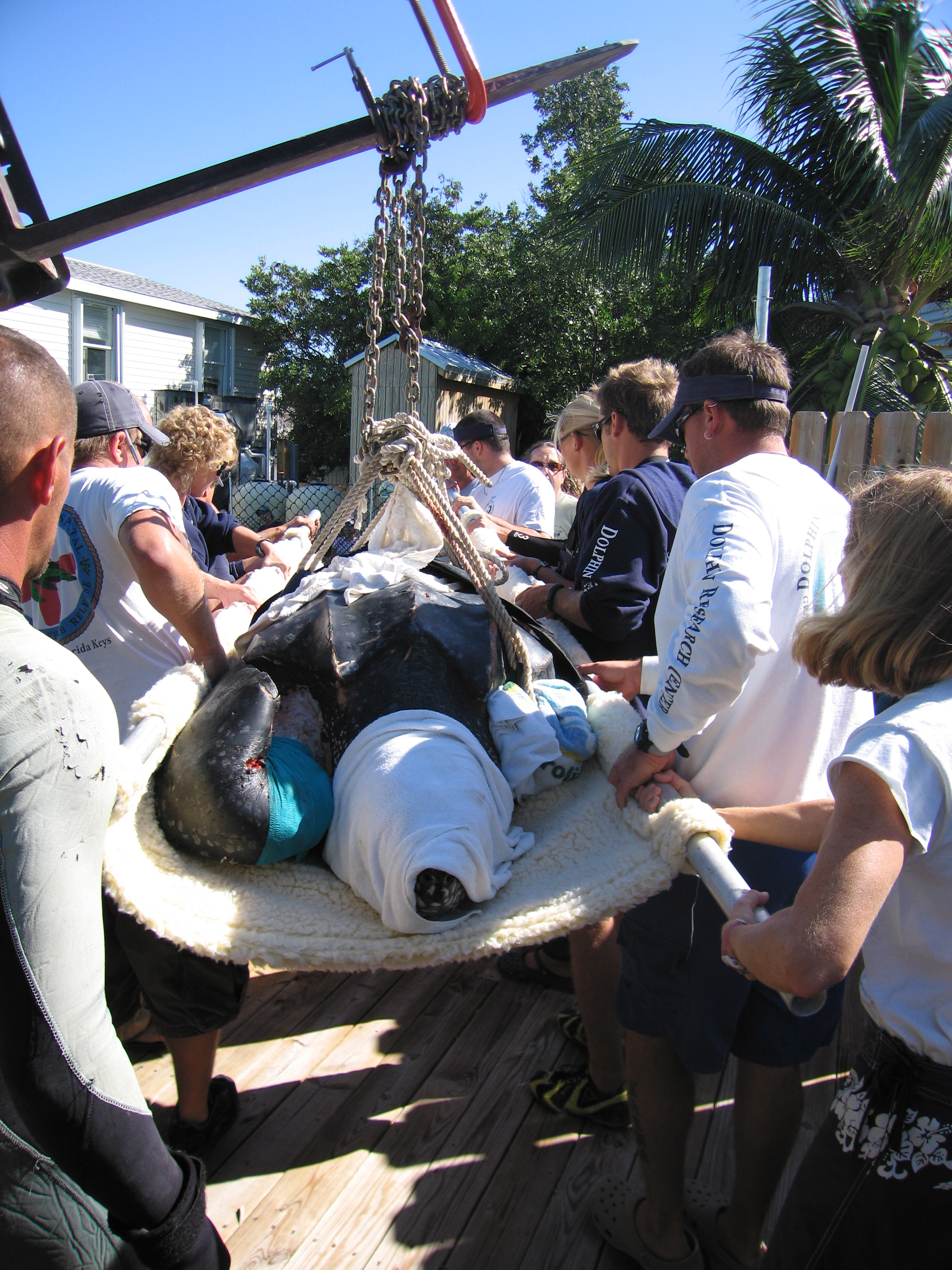 UPDATE: Schaft was monitored constantly during his stay at The Turtle Hospital/Dolphin Research Center and the staff worked diligently day and night to save his life. Unfortunately, his injuries proved too severe and he was unable to make a recovery. The rare leatherback turtle was immediately driven to the University of Florida where he was able to make a final and enduring contribution to his species. The precious knowledge acquired from the study of this one individual will aid the leatherback population long after his natural life. Schaft will live on in the science and study of leatherback turtles and in our hearts forever.