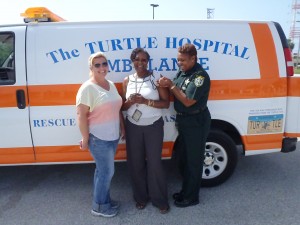 Pictured left to right are a trio of the sextet of rescuers: Carrie Backlund of NAS’s Environmental Division, Save-a-Turtle’s Melissa Wallace of the Navy’s DOD and Keena Allene of the Sheriff’s Department.

Lobster mini-season has come and gone, and The Turtle Hospital staff has stayed on its toes anticipating incoming rescue calls regarding boat hits. During lobster mini-season, more eyes and more boats on the water typically means more patients. However, our staff was not expecting the arrival of 31 loggerhead hatchlings! 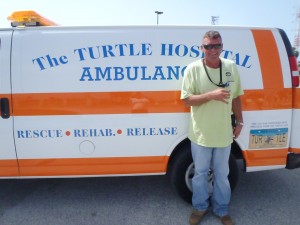 At the Truman Annex Naval Air Station (NAS) in Key West, two grounds maintenance contractors, Andy Mendez and Derrick Randolph, were preparing to mow the lawn when they discovered 6 hatchlings in the grassy area. They rang for manager Tim Swanburg who in turn dialed The Turtle Hospital. Veteran Rehabber Tom Luebke was dispatched, with the rest of the Rehab staff going about the routine preparations for a handful of hatchlings.

Arriving at NAS, Tom met up with Carrie Backlund, Navy Natural Resources Manager, and Save-a-Turtle nest patrollers Melissa Wallace, also with the Navy, and Keena Allene of the Sheriff’s Department. They determined that this nest, though marked, hatched later than expected. It is likely that these small turtles mistook artificial lighting for the moon as hatchlings will navigate to the ocean following the lunar reflection on the water’s surface. While lights on the property’s grassy area are turned off during nesting season, a tennis court–more than a football field away from the nest–remains lit at night. 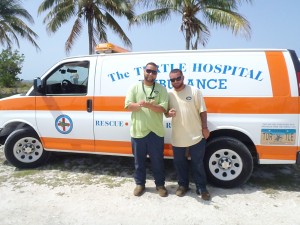 Andy Mendez, left, and Derrick Randolph spotted 6 loggerhead hatchlings in a grassy area of NAS just in time–right before they revved up their mowers!

As NAS staff and volunteers searched the grounds, the number of hatchlings continued to rise. Four dead hatchlings were found in the road having been run over by cars, and two hatchlings had died from fire ant bites. (It only takes two fire ant bites to kill a hatchling!) Tom left with 13 live hatchlings and made a U-turn for 19 more. Eventually, the nest was located and dug up, unearthing a total of 129 eggs. Five fertilized eggs did not hatch, two turtles died from being trampled at the bottom of the nest, 4 eggs were reportedly pipped but the hatchlings did not emerge, and 19 live hatchlings were added to the 13 disoriented individuals. After one hatchling died in transit from fire ant bites, Rehab staff filled up two more tanks with multiple dividers for a total of 31 hatchlings. 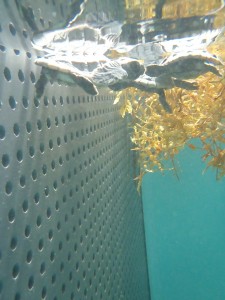 A cluster of the 31 hatchlings camouflage themselves in a floating bed of Sargassum seaweed.

Because of the limited reserve of energy hatchlings have to make it across land, to the sea and into the Gulf Stream, The Turtle Hospital will make sure these little guys and gals are strong and eating on their own before giving them a jump-start on survival. They will eventually be released at-sea in a bed of camouflaging Sargassum seaweed. We have our work cut out for us, but we wouldn’t have any hatchlings to rehabilitate if it weren’t for the care and concern of these six rescuers. We are especially grateful that they took more than three hours out of their work day to make sure every hatchling was found! 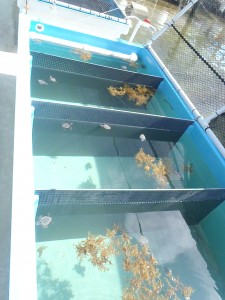 Each of the tanks is divided into compartments to separate the hatchlings based on strength, eating ability and size.