Lobster Mini-Season kicks off every year in July along Florida’s coastal waters. The Florida Spiny Lobster is a hot commodity and lobster hunters will soon be flooding our waters to get their share of this year’s bounty. The mini-season is the last consecutive Wednesday and Thursday of July each year beginning at 12:01 am Wednesday and ending at 12:00 midnight on Thursday. This year’s lobster hunt will be on July 27 and 28. Following it is the eight-month regular lobster season. The regular lobster season is always August 6 through March 31.

This increased activity brings a concern to The Turtle Hospital staff here in Marathon, Florida-Keys, because this is also a very active time of year for sea turtles. Right now it is mating season and nesting season which brings sea turtles into the nearby coastal waters. Lobster is also part of the main diet for loggerhead sea turtles which will also be on the hunt in competition with humans. The equation of more boats, more people, and more sea turtles in one area equals out to more sea turtle fatalities and injuries.

We expect to see more boat strikes and trauma as well as entanglements in fishing gear such as lobster traps, fishing line, hooks, and rope. All of these injuries have the potential of becoming fatal to a sea turtle’s life. This is a very exciting time for humans and sea turtles alike and we can make the waters a safer place for marine animals by educating ourselves on regulations and what to do if we encounter an injured marine animal. Regulations such as the size of lobster, the number you can take, the way you can hunt them, and where you can take them from all need to be considered. When boating, remember to wear polarized sunglasses and assign a spotter onboard to look out for ocean wildlife and debris.

To follow proper regulations for lobster hunting, you can follow this link to the Florida Wildlife Commission’s web page: http://myfwc.com/fishing/saltwater/regulations/lobster/

If you see a sea turtle in distress please do not attempt to rescue the animal without first contacting FWC for permission because sea turtles are an endangered species and such an action could result in a fine. Please be prepared by programming the phone number in into your cell phone. The number is 1-888-404-FWCC and is available for 24-hour response. 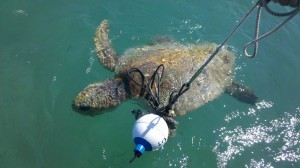 In this photo: Bev, a 257 lb female adult loggerhead, can attest to the importance of the public to locate turtles in need. She is a patient here at The Turtle Hospital recovering from a lobster trap entanglement which resulted in an amputation.