There is never a dull day here at The Turtle Hospital.  The  turtles

Channel was here filming an episode of Coast Guard Florida. What

program.  After the Sea Turtle presentation, my group got

to mingle with members of the U.S. Coast Guard as they came over

to our area to get a quick drink of water between filming.  There was a

little girl in my group that looked up at me and asked,  “What do they do

here? ” I said, “They are members of the Coast Guard and they are

the ones who go  and rescue people out on the water.  And today,

they are taking out one of our sea turtles, Stella, on their boat, to

release her.”  Her eyes got really big and then she smiled.

Everyone in our group was smiling later as we watched that 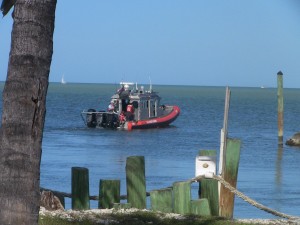 The Coast Guard boat as it took our green sea turtle named Stella out to release her.

Then the following Monday, my afternoon  educational program got

in the rehab enclosure.  It was exciting for them.  Maybe they will be in

some of the background shots when that episode airs.    My group got

to listen to the reactions of the people being filmed for Trip Flip.

The turtles bring out lots of emotions from the people who

get to visit them in their rehab area.  It changes people.

educational program on the day that Stella was released:

We had such a great vacation and The Turtle Hospital

was a huge highlight. We both loved it. You made it

so special. We learned alot too, about what we can

do to make a difference.

So, we have vowed to cut plastic grocery bags out of

our lives. Also, we will pick up every cigarette butt

we see on the beach and even the smallest bits of plastic,

fishing line, balloon strings and whatever else we see.

Thanks again to all of you at The Turtle Hospital for

the wonderful work you do there. 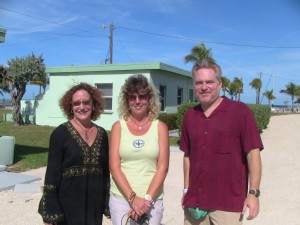 Laura and Brax Baldridge, part of my group on the day that Stella was released.

No, there is never a dull day at The Turtle Hospital.

So, come and visit us and see how the turtles can make

your day and even change your life.