The Florida Keys Sea Turtle nesting season is in full swing. Officially starting on April 15 (running through Oct 31) there have been a number of nests identified and several that have already hatched. Save-A-Turtle coordinates the monitoring of beaches in the Keys, hosting annual training sessions by the FWC and scheduling daily “beach walks” by volunteers. Each year the Turtle Hospital receives hundreds of hatchlings that became disorientated due to improper lighting in the area, ones that did not make it out of the nest (found when nest is inventoried after hatching), hatchlings that got trapped or tangled in vegetation or trash on the beach and others that were attached by birds, crabs ants etc. The baby turtles are placed in special “hatchling tanks” where they are monitored and fed. Once the hatchlings are eating on their own (finely cut squid tentacles), staff will take them out to the Gulf Stream and place them in patches of Sargassum seaweed which is where they would normally swim to. Hatchlings that do not eat on their own or that have other physical problems are held and treated until being releasable. 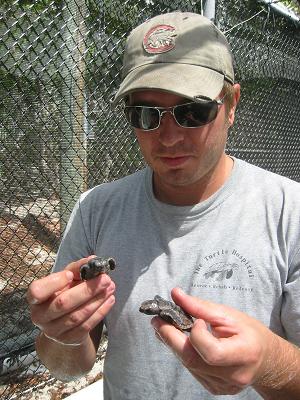 Two hatchlings from a nest on Sombrero Beach in Marathon, currently in our care.