Our gentle giant and largest resident here at the Turtle Hospital has a spectacular new home away from home.  OD, our 330 lb. green sea turtle embarked on a 2,500 mile journey by air yesterday.  OD has successfully been adopted out to Mandalay Bay Resort’s, 1.3 million gallon Shark Reef Aquarium in Las Vegas, Nevada.  Hospital staff flew by his side via FedEx Air Cargo early Thursday morning. 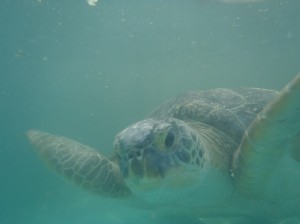 OD awaiting his departure to his new home

OD came to us back in 2008 after he was found stranded on a reef off of Key Largo.  He was found by the scuba diving company Ocean Divers which is how he got his name OD.  When OD was admitted to us he had been previously flipper tagged.  After tracing those numbers back we found out that OD had previously been admitted to the Karen Beasley Sea Turtle Hospital in Topsail, NC in 1999.  He was admitted due to floating issues and was later found to have a body cavity infection.  The wonderful staff at Karen Beasley Sea Turtle Hospital treated OD and released him two years later.  Unfortunately, OD later contracted a similar infection seven years later and wound up in trouble again.  After OD’s arrival, which consisted of shooting various xrays down the street at Fisherman’s Hospital because of his large size, it was later concluded that he was suffering from one completely non-functional lung.  His good lung was overcompensating for his bad lung and OD was not staying neutrally buoyant in the water.  Because of this condition he would need a strip of lead weights attached with a marine epoxy to one side of his shell to make him more comfortable in the water.  Due to his collapsed lung it was later decided that OD would become a permanent resident and never be released back into the wild. 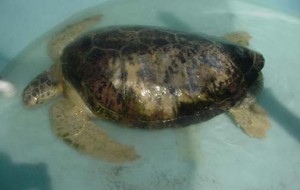 We have recently gotten word that OD has arrived at his “forever” home and is enjoying the fresh Las Vegas saltwater.  OD will go through a 45 day quarantine period where he will be in a holding tank behind the scenes to ensure he is completely healthy before going into the Shark Reef exhibit tank full of multiple reef fish, nurse sharks, and stingrays.  Special thanks goes out to Mandalay Bay Resort in Las Vegas for adopting OD, FedEx Air cargo for providing free transportation for OD, and all of the staff here at the Turtle Hospital for finding OD a great forever home.  Best of luck OD!  We will miss our big teddy bear!

Follow the links below to see more local and national stories on OD’s transfer.

The Citizen of Florida Keys: http://keysnews.com/node/49040