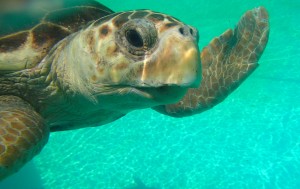 The Turtle Hospital is excited to announce a public sea turtle release scheduled for Saturday, April 19th promptly at 1:00 p.m.   Join us on Higg’s Beach behind Salute restaurant, 1000 Atlantic Blvd., Key West  as we cheer on Archer, a 140 pound loggerhead turtle!  We will arrive in the turtle ambulance with Archer at 12:30 p.m.  Archer was rescued just east   of  Archer Key in January of this year where she was found floating and struggling to dive.  X-rays revealed Archer had an impaction.  After lots of TLC and a treatment plan including broad spectrum antibiotics, lactulose, beano, vitamins and a healthy diet of squid and fish here at the Turtle Hospital.  Archer is fully recovered and diving well.  Come share the excitement as Archer returns to her ocean home!  The release will be broadcast live on the Turtle Hospital’s YouTube channel.  Compassion is contagious!