Sara was released at 11:00 a.m. from the beach at Veteran’s Memorial Park, at the southwest end of the iconic Seven Mile Bridge.  She was quite the celebrity today, and even received a Sheriff’s Department escort to the park for traffic control. Sara swam away quickly after her release and was seen coming up for air several times as she headed in a southwest direction.

Sara’s story has received national attention and her release, in conjunction with the 25th anniversary of The Turtle Hospital, was covered by long-time FL Keys public relations firm NewmanPR.  Sara was rescued on August 3, with a 4-foot spear sticking out of her head. Hospital staff, Dr. Doug Mader of Marathon Veterinary Clinic, and Monroe County Fire Rescue responded to help Sara after Charlie and Nicholas Borg found and rescued Sara while they were out fishing off of Big Pine Key.  Community support and outrage over the spearing of this turtle resulted in a reward of over $16,000 for the arrest and conviction of the person responsible.  Although we have received tips, no arrests have been made so far. Please call (305) 743-2552 if you have information. You may remain anonymous.

Sara received a final checkup before taking her by turtle ambulance to Veteran’s Park. 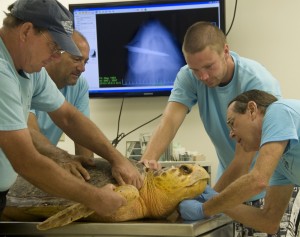 Sara had help with a Sheriff’s Department escort. 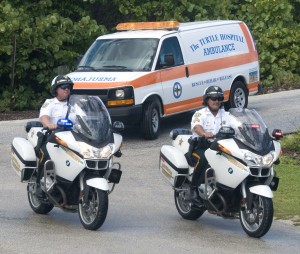 Goodbye Sara!  Thanks for helping us educate about the value of respecting and protecting our wildlife. 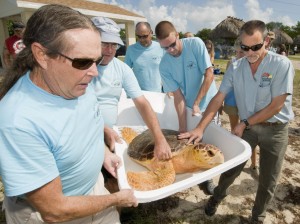 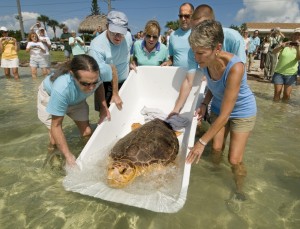