Home  » Hospital News » Thanks to the Captains!

Thanks to the Captains!

Reports of sick or injured sea turtles come in to the FWC and Turtle Hospital from a variety of different channels. One of the most consistent and helpful groups are the Charter Boat Captains. These are individuals that spend a lot of time on the water, are concerned about wildlife resources and are always very willing to help with turtles. In the past two days, two captains from opposite ends of the Keys have assisted with rescuing turtles. 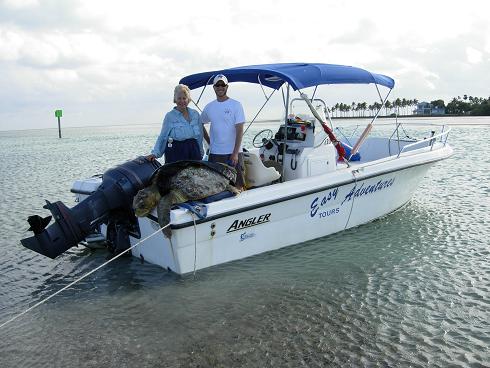 Captain Anne Baxter of Easy Adventures Boat Tours was returning with clients when she spotted a large Loggerhead Sea Turtle on a sandbar by Bud and Marys Marine. She pulled the boat on to the sandbar and was able to determine the turtle was alive (blink response when a hand was moved near the eyes). Anne immediately contacted the FWC who in turn called the Turtle Hospital. Staff contacted Anne directly and she agreed to take our personnel out in her boat to retrieve the turtle. The 210 pound turtle was lifted to the transom of Anne’s boat and brought back to Wide World Sportsman, in Islamorada (where Anne is based out of). Helpful spectators assisted moving the turtle by stretcher into the ambulance. Anne had delayed a charter and spent her own time and fuel to help the turtle!! Thanks. 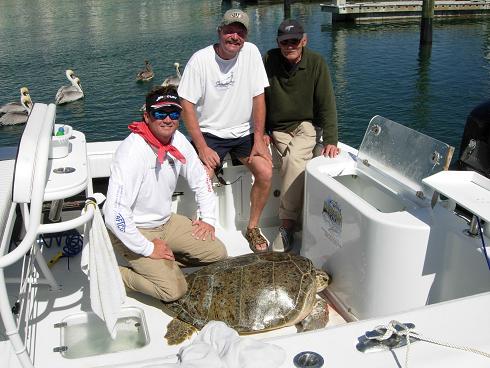 The next day, the Turtle Hospital received a call from Stephen Lamp of Dream Catchers Charters of Key West. Stephen was out with clients, fishing about 20 miles west of Key West and found an adult male Green Sea Turtle with both front flippers entangled in trap line. The turtle was in a current and struggling to surface to breath. After authorization, Stephen and his clients were able to get the 180  pound turtle on to the boat and covered with a wet towel. The Turtle Hospital dispatched the ambulance to Stock Island and met up with Stephen at the Sunset Marina (were Stephen is based out of). Once again, helpful spectators assisted moving the turtle from the docks into the ambulance. Stephen and his clients gave up time fishing to help rescue a turtle. Thanks!!