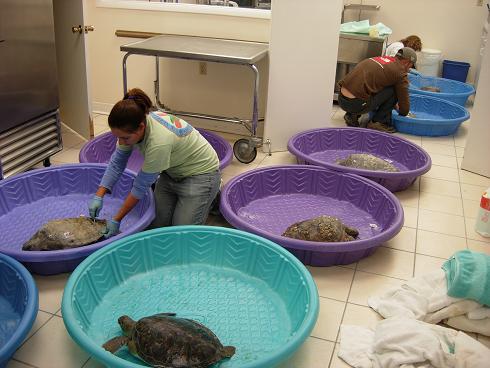 The Florida Keys typically provide year round warm weather and beautiful clear blue waters that attract residents, tourists and wildlife alike. Many juvenile sea turtles returning from the oceanic stage of their life spend time in shallower areas around Florida’s coast foraging for food in the traditionally warmer waters. It is this exact behavior that has left them susceptible to the extreme cold front staying on top of the Southeast region.

Residents and visitors bundle up beneath jeans, sweatshirts and hats to protect their bodies from the chilly conditions outside. As reptiles, sea turtles are left exposed to the elements unable to regulate their body temperatures and are at high risk of succumbing to any dramatic change in temperature. Florida Fish and Wildlife (FWC) and sea turtle rehabilitation facilities around the state are experiencing first hand what devastating effects the plummeting temperature is having on these already endangered sea turtles. 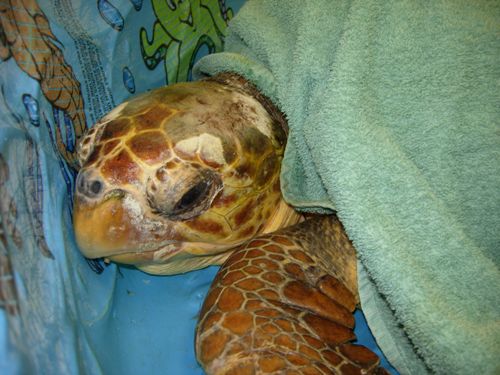 This crisis began January 6th, 2010, after 92 sea turtles, mostly juvenile Greens, were found at Mosquito Lagoon off of Meritt Island, Florida. These sea turtles appeared dead as their nearly frozen bodies remained motionless in a state of suspended animation. Unable to regulate their buoyancy or metabolism, these sea turtles began popping up at the surface floating like corks. The only movement made was caused by the passing waves. Thanks to rescue efforts organized through FWC these 92 sea turtles were rescued but it became apparent that the next obstacle was finding medical facilities to quickly and appropriately care for them. 12 of the 92 sea turtles rescued that day were also suffering from a virus called Fibropapilloma. This virus causes tumor like growths that leave the afflicted animal debilitated. Most sea turtles suffering from the virus succumb to eventual starvation, boat hits or shark attacks from impaired vision. As one of only three facilities in the state of Florida that can admit and treat sea turtles with Fibropapilloma, The Turtle Hospital quickly answered the call for help, despite an already full facility patient load of 50 sea turtles. 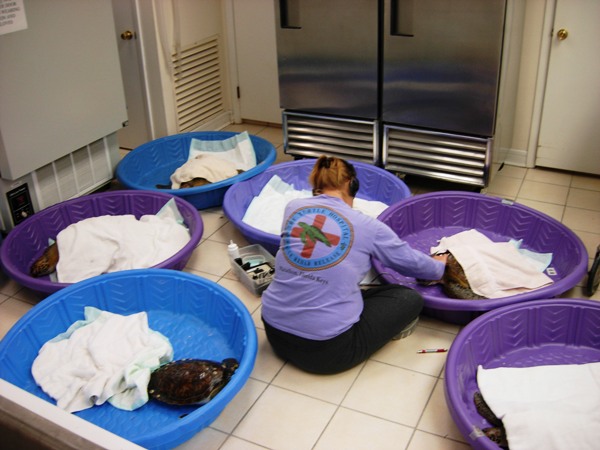 The Turtle Hospital opened its doors to these 12 cold stunned sea turtles with Fibropapilloma for treatment. All 12 sea turtles were in critical condition and required 24 hour care and monitoring. Staff immediately began heating the Emergency Room and Operating Room inside the hospital in preparation for these sea turtles. To prepare for this sudden influx of sea turtles, The Turtle Hospital rushed to acquire additional supplies such as temporary holding pools, heat lamps, extra fluids and medications. Each cold stunned sea turtle was placed in an individual pool beneath towels to begin slowly raising their core temperature. The turtles required antibiotics, warmed fluids, x-rays, blood work (which was sent to a lab for additional testing) and emergency medication to keep their hearts beating. In addition to their daily care, once strong enough, all 12 sea turtles require a surgical procedure to remove the external Fibropapilloma tumors. 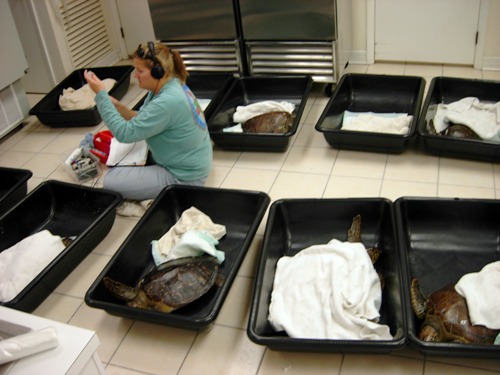 Unfortunately, this is the beginning of what could turn out to be a catastrophic event for Florida’s sea turtles. After the first mass stranding on January 6th, the following day 183 sea turtles stranded in Mosquito Lagoon and 100 near the panhandle. As of January 9th, over 1,000 sea turtles have stranded state-wide. Experts believe that with the cold weather remaining over Florida throughout the next week, the number of cold stranded sea turtles could rise to nearly 1,000. In addition to the current 64 patients being treated at the facility, many more sea turtles will be admitted by the end of the cold front. Each sea turtle will require food, medication and surgical procedures, in addition to a temporary treatment tank, individual heat lamp and continual care. 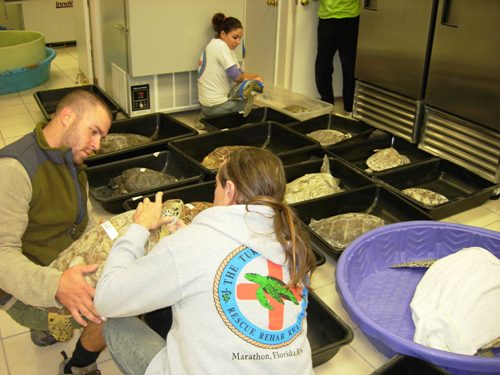 As a 501(c)(3) non-profit facility The Turtle Hospital relies on the generosity and compassion of the public to support its patients. There are many things people can do to help out. Admissions fees for the guided educational tours, purchases from our gift shop and online store, memberships and adoptions all directly fund The Turtle Hospital through a crisis such as this. Each purchase or donation will provide the medical care these animals desperately need. The Turtle Hospital can not do this without your continued support.

Nearly 200 Cold Stunned sea turtles have been rescued in the 3 day span. This is more than The Turtle Hospital admits in an entire year.