Turtle Hospital staff responded to Monroe County Sheriff’s office reporting an injured sea turtle. The turtle had been struck numerous times with what may have been a machete. (FWC and the Sheriff’s office are investigating.) The sub adult Loggerhead has suffered lacerations to the head, front carapace, neck and front left flipper. The head wounds are very serious but appear to have not damaged the brain as the turtle is strong, alert and has a good heart rate. 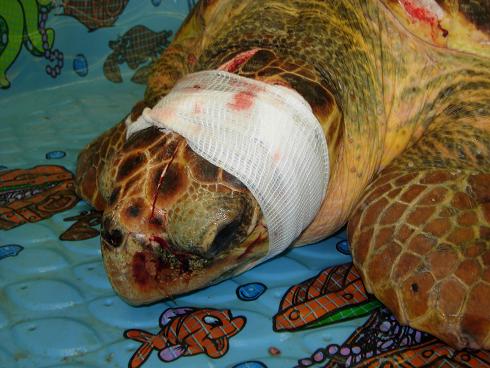 Marathon Veterinarian Hospital (Doctor Kristin Hall) and Turtle Hospital staff are doing everything possible to keep “Johnny” comfortable and on the road to recovery.

Turtle Hospital staff has taken many calls and e-mails showing support for Johnny and the state of his (or her, we don’t know) injuries. The Turtle Hospital is pleased to say that the turtle is swimming in his pool and very responsive. The first major hurdle has been accomplished: Johnny survived the machete blows to the skull. With the injuries sustained, it is remarkable that he survived the first 24 hours and exemplifies the perseverance of these animals.

Johnny has a long way to go. Now, the number one concern for staff at The Turtle Hospital is the risk facing the turtle of an infection in the brain. Unable to see how deep the injuries are in the skull, staff must approach treatment methods as being a worst-case scenario. Johnny is getting treated with a very powerful antibiotic called chloramphenicol (administered twice a day). This is a very expensive medication ($780.00 per week for Johnny) but vital to saving the turtle’s life. 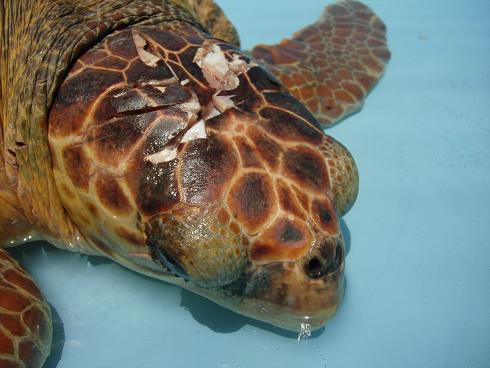 The wounds get flushed and cleaned daily 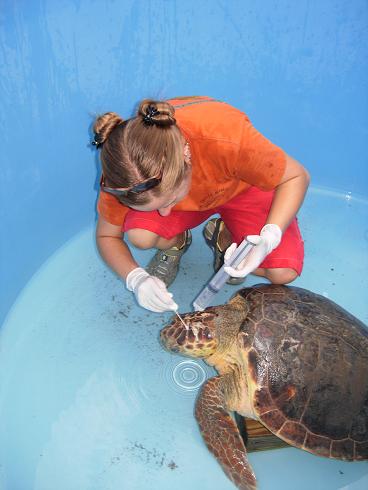 and bandage wrapped to keep the wounds as clean as possible. 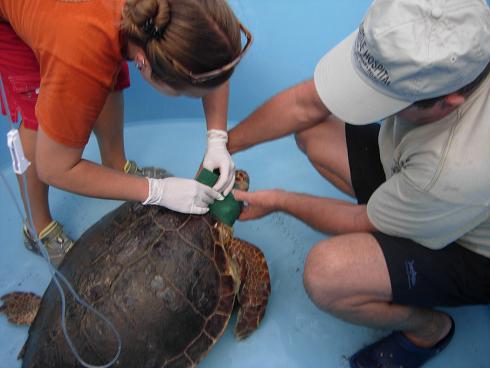 Johnny remains strong and active. He has not started eating on his own so staff are required to perform “placement feeding” daily. Squid is placed in the back of the throat, using a piece of plastic tubing. The turtle will then swallow which provides nourishment needed for the healing process.

Johnny is making remarkable progress. He is eating on his own and the water level in his tank has been raised, allowing him to stay submerged and come up for air. The wounds to the head, neck and front flippers are healing nicely helped by the daily cleaning. Johnny remains active alert and strong . Staff is optimistic for recovery.

Johnny’s wounds have healed and blood work from 2 weeks ago was normal. A second blood evaluation is scheduled and if all parameters are within limits, he will be ready for release. This is an incredible success story, picking up a turtle that had been chopped up with a machete to being able to put him back into the ocean to continue his life. 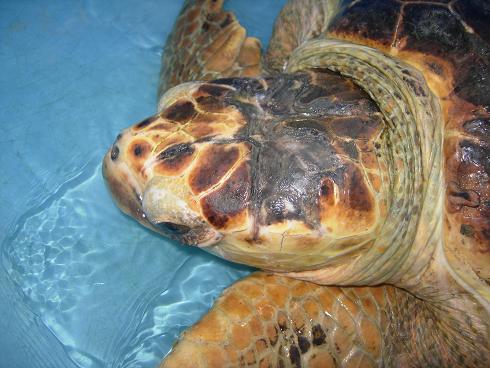 Johnny’s blood results have come back clean. A “Public Release” is being organized to allow members of the community and those directly involved with the rescue and rehabilitation, to attend his release. The release is tentatively scheduled for Oct 14, 2008 and the location is being planned at the West end of the Seven Mile Bridge (this is where Johnny was rescued after the machete attach.) A press release and web site article will be posted as soon as plans are finalized.