Earlier this week, Marathon was affected by tropical storm Fay. While it did not reach hurricane level there was quite a bit of rain and high winds in the area. The winds were strong enough to damage the shade cloth which covers the pool and tank enclosure at the Turtle Hospital. 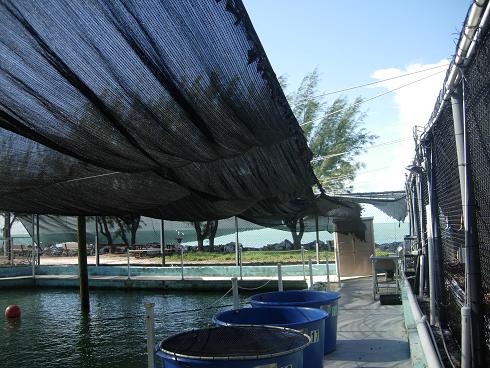 The Turtle Hospital has a hurricane plan that was put into action. In addition to the normal preparations like putting up shutters and placing lawn furniture inside, steps are taken to ensure the safety of the turtles in our care. During hurricane Wilma in 2005, the enclosure area where the 100,000 gallon salt water pool and 26 large tanks are, was under 6 feet of water due to the storm surge. Fortunately, none of the turtles that were in the pool during the storm were lost or hurt (the smaller turtles from the tanks were moved into the hospital and dry docked in kiddie pools).

Last year, thanks to a generous grant from the U.S. Fish and Wildlife Service, we had two 30 foot diameter, 26,000 gallon fiberglass tanks installed behind the hospital. Each tank has sand filters, protein skimmers and ozone generators, being able to operate as either a closed or open system. Gasoline pumps fill the tanks from the Gulf and can be used in case of extended power outages. This provides the ability to remove all the turtles from the enclosure area and provide safe housing during a storm. 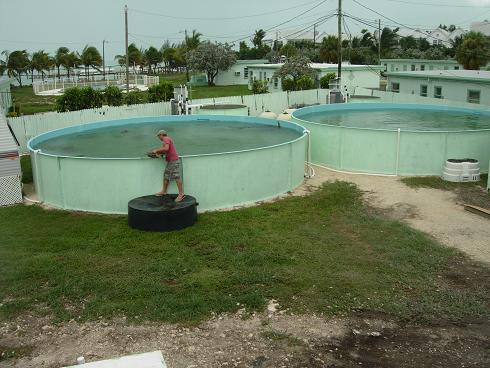 Prior to Fay’s arrival, staff moved all of the turtles from the pool into the tanks. This was the first time the new tanks have contained turtles and was good practice, providing a number of lessons learned. The added bonus was having the permanent resident turtles already being handled so all of them got a physical. 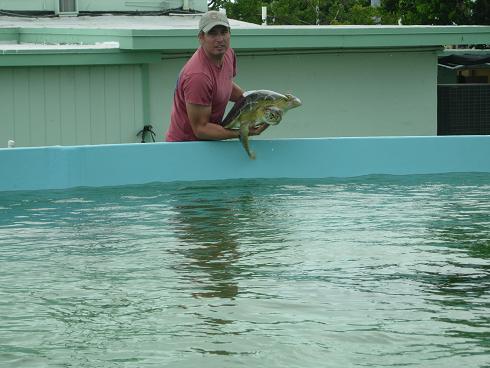