A crowd of about 100 people gathered at Anne’s Beach in Islamorada on Saturday, June 18, to celebrate the release of Charley II, a loggerhead sea turtle that spent four months under rehabilitation at The Turtle Hospital in Marathon, Florida Keys. Charley II was found floating, due to an infection, off of Windley Key on February 17. 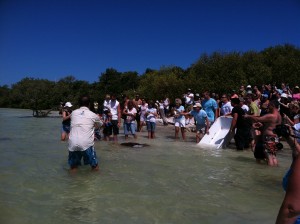 Soon to be released is Kruck, a green sea turtle rescued by Boy Scouts from Sea Base on a snorkeling trip.  Kruck has three propeller wound scars and partial rear flipper paralysis from being hit by a boat, but he is a survivor.  He had managed to survive through his injuries and was a very robust turtle when he arrived at the hospital.  He quickly recovered from an infection and is now ready to return to the location he was found, at Hens and Chickens Reef off of Islamorada.

There are 35 sea turtle patients at The Turtle Hospital, all available for viewing by joining one of the Guided Educational Programs offered at 10:00, 1:00, 2:00, and 4:00 daily.  Several turtles are being treated for fishhook ingestion, while others were entangled in fishing gear and balloon ribbons, hit by boats, or suffer from a tumor disease called Fibropapillomatosis.  For more information or to make a reservation (recommended), please call (305) 743-2552.