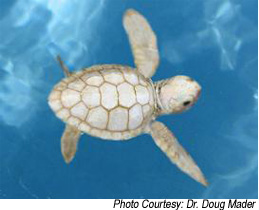 Thriller is a Loggerhead Sea Turtle hatchling that was found on a beach in the Ft. Lauderdale area. This baby turtle is not like the others. During the routine excavation of a hatched nest, the little white turtle was found still buried in the sand. (It is not uncommon to find a few hatchlings still working to dig their way out as a nest is being excavated, but it is very uncommon to find a purely white-colored one.) 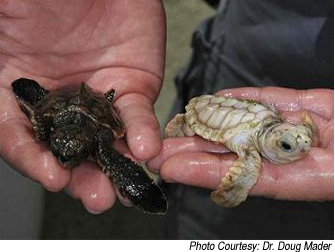 Loggerhead hatchlings are typically a very dark brown or gray color. This dark coloration acts to camouflage them among the Sargassum weed of the open ocean currents, their home for the first three to seven years of life. However, Little Thriller is different. He was born with Leucism, a rare genetic defect that prevents the production of skin pigments. This condition is similar to albinism but the eyes are blue or black, not the trade-mark red as seen with albinos.

UpdateLittle Thriller has died. He has always been a fussy eater requiring special food placement and handling. After our first cold snap (the post hatchlings are brought into the hospital when the temperature drops) he stopped eating. Staff was required to “placement feed” the small turtle several times a day but it would appear the he was not processing the calories and continued to lose weight. Thriller was a special turtle and will be missed.