Good Samaritan fisher folks reported a turtle in trouble in the Intercoastal waterway off of Islamorada. The sub adult Green Sea Turtle would surface for air and flip over on it’s back and struggle. Turtle Hospital staff met the boat at a nearby dock and were transported to the location. The turtle would swim normally underwater but became stressed and disorientated on the surface. After capturing the 156 pound turtle, it became apparent that it had been hit by a boat, possible twice. There was a deep wound across the top of the head, two deep wounds on the upper right carapace and four more wounds affecting the lower left marginal scutes. Agnes is very strong and staff is hopeful that treatment to repair the prop wounds will allow successful rehabilitation and eventual release. 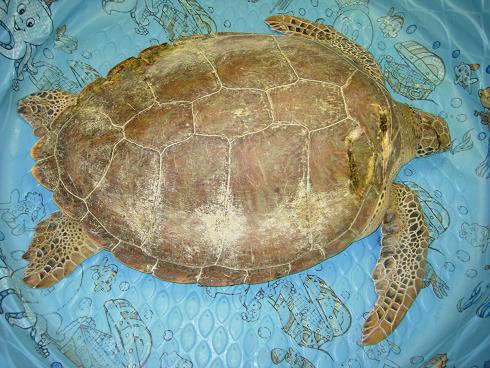 Update – March 4, 2008 Dr Doug Mader and staff performed surgery to remove bone fragments from the head wound and carapace wounds. An ultrasound was performed to ensure the body cavity has not been breached which could allow sea water to enter. 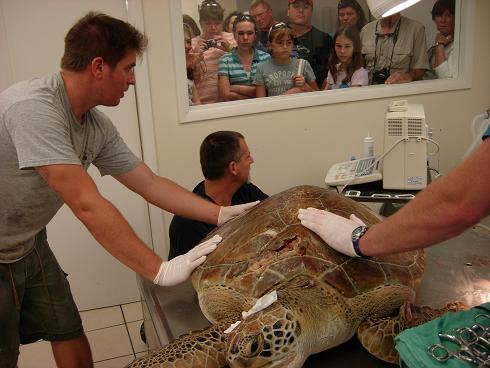 There appears to be damage to one of the upper eye nerves which results in the right eye not being able to “look” up. This could be the cause of the disorientation observed when the turtle would surface for air. In time it is expected that Agnes would learn to use her “good” eye and be able to compensate for the different fields of vision.