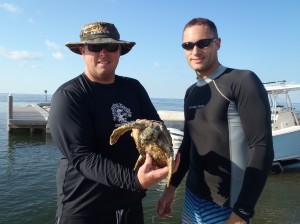 Late in the afternoon, on September 14, The Turtle Hospital received a call about a floating hawksbill just 2 miles off shore on the Gulf side of Marathon. It was an easy enough drive, just a few blocks away, to pick up the new little guy and meet with his rescuers. The photo above is of the rescuers who noticed this 5.3 lb hawksbill in need. These two men, Steve Shaw and Mark Thompson, are firefighters here in Monroe County and wanted to name the turtle they rescued Andy after one of their close friends. Andy, the turtle, is very greatful that not only do they save human lives but animals too!

Once Andy was brought back to the hospital for triage, an old lesion was found on the left front flipper that could have been from being caught on a fishing hook at one time. Andy was probably floating out there sick for quite a while before they found him because he is very malnourished, underweight, and has poor blood chemistries. We hope the best for this little hawksbill and have him on antibiotics and fluids as well as wound care of the injured flipper. This little one will require a lot of attention since he is in such critical condition; however, Andy is in the right place to get all the love and care needed to make a full recovery. 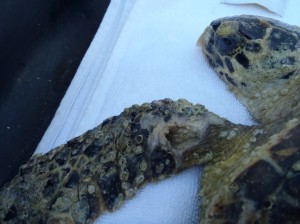