Home  » Past Patients Blog » Anita a Hawksbill From Curacao

Anita a Hawksbill From Curacao

After 9 months of planning and federal permitting, the Turtle Hospital received its most long distance traveler thus far. “Anita”, a young Hawksbill sea turtle, made the arduous trek from Curacao, a small island north of Venezuela, to Marathon for medical care after being struck in the head by a Seadoo. The critically endangered turtle made history by being one of the few live marine turtles ever to fly in the passenger cabin of an airplane, thanks to a one-time exemption granted by American Airlines. Anita was found injured by teenagers in Curacao back in February 2007, and brought to the Curacao Sea Aquarium for help. She was here when Dr. Alina Szmant, Professor of Marine Biology at University of North Carolina Wilmington, who was in Curacao with her UNCW students and teaching a coral reef ecology course, began in earnest the effort to rescue Anita and find her a new home where she could get the medical help she needed. 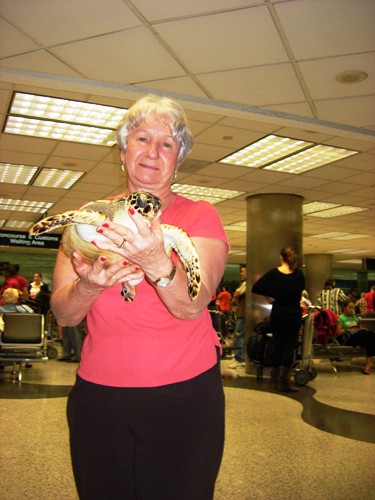 Dr. Szmant made a special trip to Curacao, complimentary of American Airlines, returning the following day to Miami International with Anita the sea turtle. There she was met by Turtle Hospital staff members and a modest crowd of travelers attempting to get a close glimpse of a sea turtle. 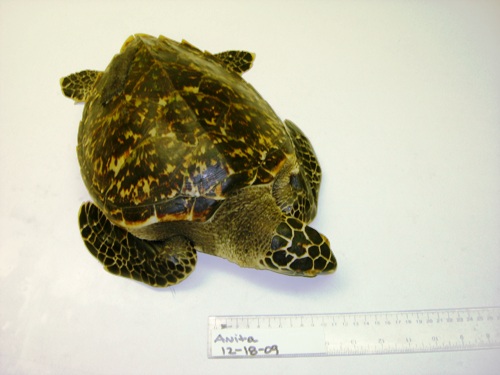 The Turtle Hospital would like to extend a special thank you to American Airlines for providing transport for Anita, and to Dr. Szmant for giving this young turtle a second chance at life. The ultimate goal is to rehabilitate Anita so that she can be released and eventually breed and contribute to the recovery of this endangered species. However, if she does not recover she can still benefit her species by being an ambassador for her species in outreach and education activities.

Although Anita continues to swim in circles we have seen improvements in her behavior. Every morning, for approximately 1 hour, Anita spends time in the shallow end of our 1,000 gl. saltwater swimming pool for some physical therapy. During this time, she often tries to dive to the bottom of the pool and shows interest in the other sea turtles sharing the quad with her. Anita also loves shrimp! When first admitted she was shy and uninterested in food. Now she is quite active and alert and interested in eating as much as food as we offer her! Her progress may be slow, but staff is optimistic.

The next step in Anita’s recovery will be placing a small eye patch over the left eye. Dr. Mader (Marthon Veterinary Hospital) has determined that Anita is missing at least two optical nerves in her right eye which may be contributing to her irratic behavior. In addition to the temporary eye-patch Anita will also need an MRI.