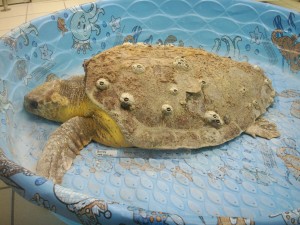 Barney, a 120 pound Loggerhead sea turtle, was rescued on March 13th up towards Keys Largo where he was found floating. When Barney first arrived he received a physical which included x-rays, blood-work, measurements, and a bath.  Nothing was visibly wrong with this turtle but when the Turtle Hospital Staff received the results from Barney’s blood-work they soon realized that he most likely has a body cavity infection.  For this infection he is taking antibiotics and is relaxing in his hospital tank out back with our other sea turtle patients.  We are hoping for a quick recovery with Barney!

UPDATE: 5/9/11 Barney is doing great no longer floating and is now not on any type of medication!  Barney is very active and loves getting into trouble!  He chases the broom around the tank and tries to climb out of his tank! He is getting very close to go home and we are all hoping here at the Turtle Hospital to see him release in the next couple of months!

UPDATE: 6/10/11 Barney was released on the beach between Florida Bay Outfitters and Caribbean Club in Key Largo.  His rescuer Captain Mark Hutchings was there to help carry him out as well as Turtle Hospital founder Richie Moretti, and staff Jo Ellen Basile and Bob Smargiassi.  What a great way to start the summer!!!