Norman Christensen and his daughter Hadley were boating through Tom’s Harbor Cut, on their way to do some lobstering. They saw a small Green Sea Turtle floating listlessly on the surface and noticed it had a number of tumors. Hadley had previously visited the Turtle Hospital and had her dad call to report a turtle in trouble. Turtle Hospital staff requested they pick up the turtle and bring it to shore. Staff met them at the Hawks Cay marina on Duck Key. 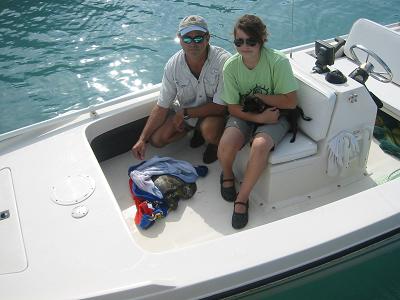 Hadley (the juvenile turtle was named after her rescuer) has fibropapilloma tumors on all flippers, the neck, underside and both eyes. It is very emaciated and weak from not being able to feed due to the tumors. The turtle will be scheduled for surgery as soon as possible as the eye tumors could blind it which would make it un-releasable.

While Hadley and Norman did not get their lobster dinner, they do get bragging rights for the catch of the day; rescuing an endangered species.

Sadly, Hadley (the turtle) has died. She was very weak and had been kept “dry docked” to ensure breathing would be easier. With the number of large tumors, heavy parasite load and not being able to feed herself for some time, treatment came a little too late. A necropsy will be performed.