Brandy, an adult female Green Sea Turtle was rescued in July 2007. Reported to the FWC by Good Samaritan fishermen, she was anchored by two lobster traps with line wrapped tightly around her front left flipper. FWC dispatched two boats and accompanied by Turtle Hospital staff located the entangled turtle 45 miles West of Key West near the Marqueas Islands.

With considerable difficulty, the 342 pound turtle was captured, freed from the “anchor” and brought aboard one of the boats. The trap line was so tightly wrapped around the flipper, the skin and muscle was cut through to the bone.

Brandy (named by one of the FWC officers, after his daughter) was brought in to the docks at Stock Island and moved from the boat to Turtle Hospital ambulance using a large forklift. At the Turtle Hospital, due to the larger size and weight, a hydraulic crane was used to move the patient. (Brandy is the largest turtle ever rehabilitated at the Turtle Hospital).

Dr Doug Mader and staff performed surgery to completely remove the badly damaged flipper. Sea Turtles can survive in the wild missing a flipper and can continue to nest. 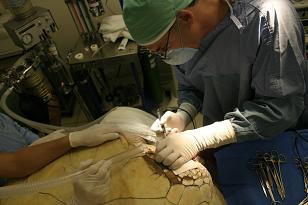 Brandy is recovering nicely. Her surgery wound is healing and she is receiving vitamins and antibiotics in addition to heads of lettuce as a food supply. She is expected to be released in February or March 2008.