Debi was also rescued by FWC and National Oceanic and Atmospheric Administration (NOAA) while conducting their Florida Bay “Capture Turtle Project”. Dr. Doug Mader, of the Marathon Veterinary Hospital, took a look at Debi’s x-ray which revealed she had swallowed a j-hook which was lodged in her throat and too far down her esophagus to retrieve without injuring her further. We were all thankful that her x-rays confirmed a corroding hook; it was not a stainless steel hook which will last over a thousand years before beginning to decay. She was released on June 26th by FWC and NOAA by boat near the same location she was found. 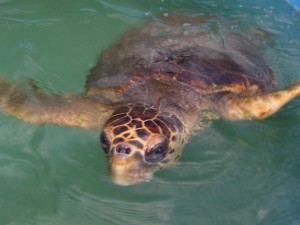