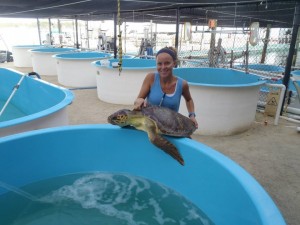 Cosimo weighs 54.1 pounds and is part-Loggerhead, part piggy! He was brought in byFWC& NOAA on June 25 with a serious crab impaction. The image below shows his x-ray upon arrival: a GI tract packed with crab claws & shell. Our best guess is that Cosimo swam upon an area where crab by-catch was dumped and he began to eat his little heart out. So much so that he backed up his digestive system and stopped eating. He is a bit emaciated and has passed almost a pound of crab shell since arriving on the June 25th. He is currently on medication to help him pass the rest of his impaction. Check back soon for an update!