Meet Debi!  Debi is a 145 pound Loggerhead sea turtle that was brought to the Turtle Hospital on March 7th.  Debi was found by the FWC(Florida Fish & Wildlife Conservation Commission) and NOAA (National Oceanic Atmospheric Administration) while conducting their Florida Bay “Turtle Capture Project.”   This Loggerhead was found to be rather thin and when they conducted bloodwork something didn’t seem quite right. Once Debi arrived at the Turtle Hospital an x-ray found that she had swallowed a fishing  hook! 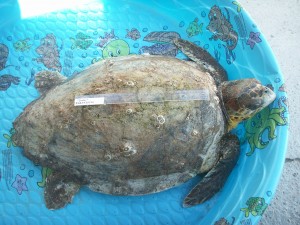 A couple days after Debi arrived Dr. Doug Mader our volunteer veterinarian attempted to find and remove the hook seen in the x-ray.  The hook in Debi was a little too far down in her esophagus for Dr. Mader to reach with the endoscope.  Even though he could not remove the hook Dr. Mader is very confident that the hook looks like it is already dissolving and will pass through Debi when she goes to the bathroom.  To assist in the passing of the hook the Turtle Hospital staff is giving Debi vegetable oil with her squid breakfast every morning and with her squid lunch every afternoon.  As soon as Debi passes this hook she should be feeling a lot better and will be released! 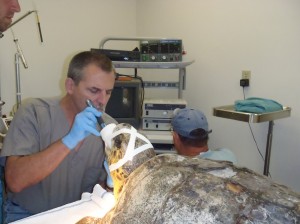 UPDATE: 5/9/11  Debi is no longer on any type of medication.  She is still healing up from the J-hook that she had swallowed and will need to undergo and x-ray to insure the hook (which was rustable) has passed through her system.  We are hoping for a release sometime within the next couple of months.