Forest, brought in byFWC & NOAA, received his name from the forest-like growth of algae on his shell when he arrived on the June 26th. After giving him a fresh water bath to remove his epibiota, we noticed a strange wound on his shell. A chunk of bone was removed from his shell near the spine revealing a healed hole on one of his scutes. He is slightly underweight but eating and sinking to the bottom of his tank just fine. We don’t believe he will be a patient here for too long. 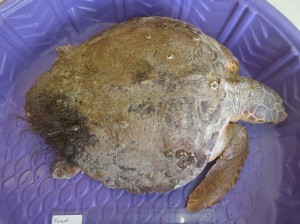